The Nintendo Switch has been around for a while, and a great many games have come to the system, with even more on the way. It should only be natural that a console that can shift between three forms has a wide array of games to go with it, so here’s five games that, if you have the Switch or plan on getting it, should definitely find room on your shelf.

Minecraft is on pretty much every system, and for good reason. The addictive wide-open sandblox shines even better on Switch, since you no longer have to wait until you get home to work on the building idea you have in your head: you can make it happen anywhere. With constant updates and plenty of add-ons, DLC, and hundreds upon hundreds of items to craft, the only limit in Minecraft is your own imagination.

Don’t let the name fool you: it has no direct connection to the previous game, but it definitely shares its charm, style, intricacies, and gorgeous landscaping. With an excellent story, a memorable cast of characters, and action-RPG elements that’ll keep you on your toes in the heat of battle, it’s definitely one to pick up and play. Just keep in mind you’ll be playing for quite a while. 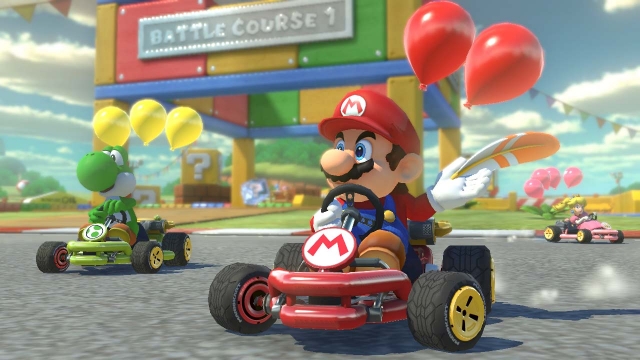 Even if you’re not a fan of the racing genre, Mario Kart 8 Deluxe is sure to make you one. With simple to learn and easy to master controls, and stunning graphics you can lose yourself in, what the game lacks in story it more than makes up for in the hours of fun you’ll have blazing through tracks old and new. With plenty of characters and parts to choose from, you can pick out your ultimate ride and aim for that winner’s circle in style, and portability.

2. The Legend of Zelda: Breath of the Wild

GOTY isn’t an award given lightly, and Breath of Wild earned it and then some. Travel across a ruined yet breathtaking Hyrule to battle, forage, explore, and uncover the mystery of Link’s century-long slumber as you fight the Calamity and win the war that started so long ago. Breath of the Wild shines in its storytelling, and can leave an impression long after the Switch has been shut off.

Surprising no one, Super Smash Bros. Ultimate makes the list. Whether you’re a die-hard veteran anxious to take your skills to the next level, a casual fan happy to see the new characters, or even the most neophyte of neophytes, if you love tossing around your friends and family with your favorite video game characters, look no further than the latest iteration of the party fighter that’s taken the world by storm. The title’s not for show, with plenty of third-party characters joining the fray. There’s faces old and new, and with everyone from the previous games making their way in, it truly is Ultimate.

Loves writing, food, and Pokémon more than legally allowed. Can be found playing RPGs or not shutting up about his girlfriend.