So you’ve decided to try your hand at Terraria following the recent online buzz generated by the launch of the ‘Journey’s End’ update, Re-Logic’s final major content update for the sandbox behemoth that is Terraria. The launch has brought a large resurgence of former players back into the game, which is evidenced by Terraria sitting at the fifth spot (as of writing) on Steam’s current player count.

But, as I learnt during a community games night with GameGrin, Terraria can be incredibly daunting and confusing for newer players - the first few hours of the night were paraded with a series of questions that are, to me -someone with nearly 700 hours in the game-, very basic fundamentals. It was in doing this that I realised how little Terraria holds your hand at the beginning; even with the changes to the Guide character that have been made over recent updates to make him more, well, guiding, the early game can be a maze of confusion for new players, and even late-game can result in a similar feeling if you’re stuck on where to go. It is with this in mind that I am writing these articles; a sort of cure-all for early game confusion and hopefully a guide that can set you on the right path. The initial intention was for this all to be a single piece, but during writing, I realised just how much there is to talk about, so this will be the first part of however many it takes to explain Terraria. So whether you’re a new player exploring the hype, an older player returning to a changed game, or something in between, I’m hoping this guide will have something to help you in your early-game development

Inventory - What it all means

Having confusion when trying to navigate a game’s inventory screen is not a feeling you want to have, but it’s a feeling that many new Terraria players end up feeling due to the game giving you all the information at once without really explaining it. Somethings like your hotbar may be self-explanatory, but the armour and accessories section is a maze of slots that newer players will know nothing about, so a little help in understanding this screen will be a major part in understanding Terraria.

We’ll start on the left side and work our way across from there. The hotbar is at the top of the inventory section, and this allows you to put 10 items in easy reach for your character and can be accessed through the number keys (0-9) or the scroll wheel. A typical layout would be (not necessarily in this order) a melee weapon, a ranged weapon, pickaxe, axe, rope, a random block (for placing with ease), and a magic mirror/recall potion. Everything else is personal preference, but these are the basic things to make sure you always have easy access to. There is a small padlock to the left of the hotbar which locks the items in this row in place and means you won't accidentally swap things out if you click on them. 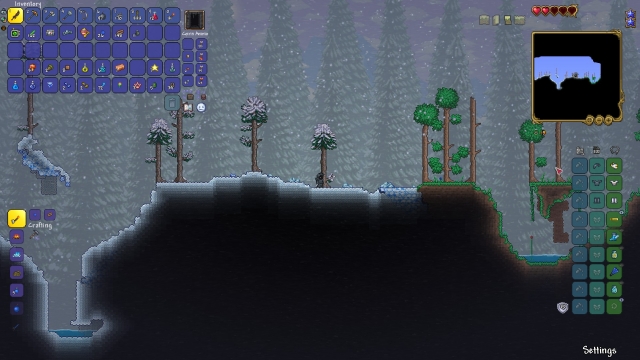 Below this bar, we have the rest of your inventory. This is everything else that you currently hold on your person. There is the option to automatically sort these items, which it is recommended you do (this won’t affect your hotbar, even if it isn’t locked). By shift-clicking an item, it will put it into the trash, which can allow you to clear your inventory. If you accidentally delete the wrong thing, don’t worry; you can recover the most recently trashed item from the little trash can icon near the bottom right. In a feat of confusing players for multiple update versions now, shift-clicking when trading with merchants will sell the item to the merchant, which is useful, but doing so when looking in a chest (or any other storage container) will trash the item rather than swapping the item between the two inventories, so make sure you don’t get confused and trash valuable items. You can quick-stack to nearby chests, which will automatically search nearby chests for items similar to whatever is in your inventory and will place these items inside. However, as the GameGrin crew learnt, this can backfire in multiplayer as the feature has a quite a generous range on it, leading to you accidentally giving half of your valuables to your neighbour. The best way is to open each chest individually and click ‘quick stack’, which will have the same effect but only for that chest. Items can be favourited by alt+clicking them, which gives them a special border to make them stand out and also removes the ability to shift+click them, which can be an easy method to avoid any mishaps. 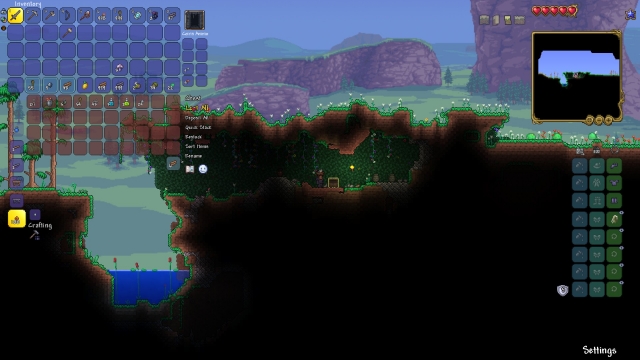 Just to the right of the main inventory, you will have two small columns labelled ammo and money. This is where coins and ammunition are stored so they don't clog up your inventory, but if you use multiple types of ranged weapons, you may find yourself needing to use your actual inventory space for some ammunition. You’re going to want to keep your money stored away, so you don’t lose it in the event that you die, as you only lose money that you physically have in your possession.

Below all of this, hugging the left side of the screen, we have the big beast of Terraria; the crafting system. I could honestly write a whole article on just the crafting system alone, but for the sake of trying to make this already long-winded guide a reasonable size, I'll try to keep it short. In essence, here is where you’ll be crafting everything you need, ranging from weapons, armour, potions, walls, furniture and even boss summoners. You can scroll through everything that you can craft with what you have in your possession, and standing near the right pieces of furniture will allow you to craft the appropriate item. For example, standing near furnaces will allow you to turn ores into bars, and you can then stand near an anvil to turn those bars into weapons and armour. You can see if something is used in a crafting recipe if it is listed as a ‘material’, and by talking to the Guide, you can find out everything that a particular item is used to craft, including what furniture you need to be standing near (if any) to craft it. 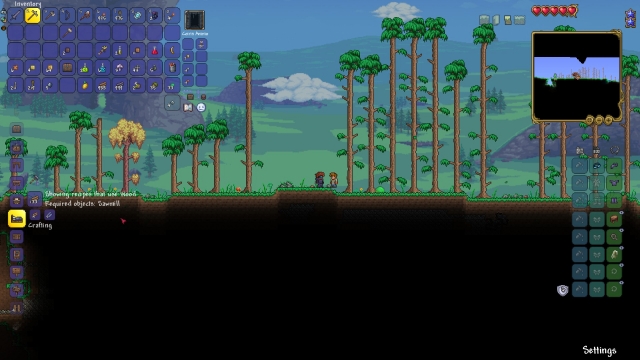 Moving over to the right side of the inventory screen, we have your armour and accessories, alongside your vanity and dyes. Armour is fairly self-explanatory, being your primary source of defence and later in the game, will allow you to specialise in certain weaponry with the buffs that certain armour sets give you. Below this we have accessories, which are items that, when equipped in these slots, provide a variety of buffs for your player. These buffs can range from allowing you to double your movement speed, improving your health regeneration or even granting flight. To the left of both of these we have another two columns, which are your vanity and dye slots. Accessories and armour will affect how your character looks, but by placing something in the vanity slot, you can override what is shown on your character without sacrificing the stats of whatever you’re actually wearing. Got an armour set that looks really cool but doesn’t have good stats compared to another one? Wear it on your vanity slots and look good while still reaping the benefits of the better armour. The same can be done with accessories, as almost every accessory a player is using can be seen on their player model. As for dyes, these can be used to dye their respective slot to a different colour. 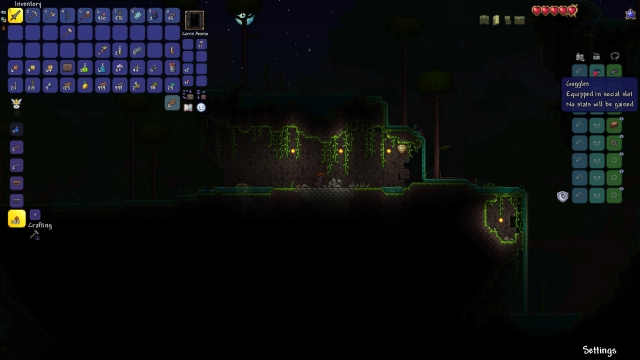 But wait, there’s more! Over this side of the screen you also have Teams, NPC management and miscellaneous tools/equipment. Teams is a system made for Multiplayer, and is used to be able to see where other members of your team are with ease. Miscellaneous equipment can be found by clicking on the little grappling hook icon near the top, and this takes you to a screen with more slots to fill. These are for minecarts, grappling hooks, pets, a light pet, and a mount. These allow you to summon/use these items without them clogging up your inventory, and again have a slot that allows them to be dyed. After this, selecting the little house icon brings you to the NPC management screen, which allows you to see which NPCs are currently in your world and where they are living. You can use this screen to change the house they are living in by drag and dropping their icon over an applicable house. Speaking of, I have a very old, yet thankfully still relevant, guide to making appropriate housing for NPCs, which can be read here if you need a little push.

And with that, we have the whole inventory screen down. So now you understand what you’re looking at, where do you start? Tune into the next article to find out!

The Changelog for Terraria's Final Update is Here... And it's Massive