Fallout: New Vegas is, to me, one of the great RPGs. In spite of every technical issue that plagues every release of the game, as well as the ugly colour palette and downright awful engine inherited from Fallout 3, it manages to null every flaw by simply engaging the player in the world, characters and story.

I’m far from the only one that loves this game, it constantly butts heads with Fallout 3 for being the best 3D Fallout game in the eyes of the public (and, for the record, I far prefer Fallout: New Vegas) and has one of the most dedicated RPG followings. Yet, many people don’t seem to have realised just how pertinent Obsidian’s game is (and was) in its themes and ideas, and I want to try and express why I believe these ideas to be incredibly important to consider and reflect on, ten years later. 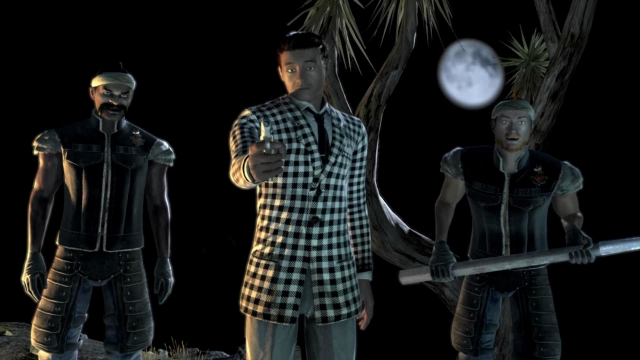 Fallout: New Vegas creates a scenario that puts your player character, the Courier, in the eye of a storm that concerns three major factions. These are the New California Republic, Caesar’s Legion and Mr. House, or simply, New Vegas.

The NCR is, as the name suggests, a nation comprising four contiguous states in southern California as well as other holdings in northern California, Mexico and, most importantly, Nevada. Both its aesthetic and general values are derived heavily from Old World America, and fittingly the nation suffers many of the same issues that America has suffered, historically. Over-expansion in other states/nations, intense corruption and bureaucracy has made the NCR sluggish and ineffective at protecting many of its citizens from outward threats and has led to many of the populace of Nevada, in particular, incredibly wary and tired of the NCR’s inefficient rule. The NCR, are, in short, foundationally solid but completely lacking hindsight as to what made the nation it attempts to emulate fail.

Mr. House is the kingpin CEO and proprietor of the New Vegas Strip, and holds many of the keys to the conflict that the other two factions are engaged in. Whilst his, at a glance, neutral position and comparatively modern and attractive city can be alluring, Mr. House allows the areas around the main strip to be living in squalor and be rife with criminal corruption and dodgy deals, and will not allow entry to newcomers unless possessing a “New Vegas Passport” or at least 2,000 caps. The NCR are allowed entry to the city due to a previous deal, but the city remains largely a rich man’s home because of the extraneous effort required to get inside if you are not fortunate enough to have the caps.

Caesar’s Legion is a fascist dictatorship founded on large-scale slavery and the aesthetics of classic imperial Rome. Its structure relies on constant expansion into territories and the enslavement of enemy tribes, incorporating them into the Legion’s ranks. The Legion is ultra aggressive, having conquered much of Eastern states of America in only 25 years, assimilating 86 tribes in the process. Caesar (born as Edward Sallow) is the leader of the Legion, and his goal is to defeat the NCR and incorporate their infrastructure into his own nation and create a full empire in the process, Vegas being akin to his Rome. 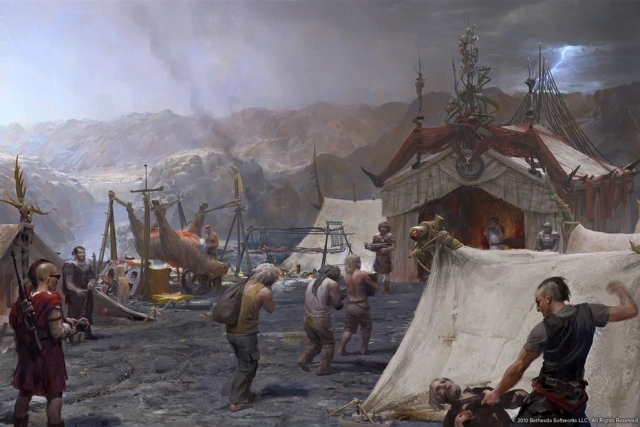 The crucial part to understanding why New Vegas’ narrative is to understand why the Legion is gaining ground in New Vegas, and why the NCR is weaker in comparison. The New California Republic is, as mentioned before, stretched thin and largely ineffective. These failings have left the working class feeling disillusioned with the New California Republic and, mistakenly, with democracy as an extension. As democracy fails, alternatives become far more attractive. The rampant raiders that the NCR are simply inequipped to deal with are, on Legion roads, completely absent because of the Legion’s ability to deal with this in great measure (and their brutality means raiders are so afraid of punishment that they dare not attempt to set foot on Legion roads). In a similar fashion to the Silk Road in the Mongolian Empire, the relative safety from outside threats is attractive to those on the frontier who are completely left out to dry by the NCR, and this attitude causes public opinion to soften on the opposing, decidedly fascist force.

Why is this relevant? Moving swiftly and strongly into my own beliefs and viewpoints, the mistaken rejection of left wing ideals for the promise of a better future, is, in short, the reason the far right wing were able to rise in such numbers in recent years, in real life. The lie that was the catalyst for the far right upshoot in the years preceding the 2016 American election and Brexit was constructed on the notion that left wing ideals were the issues behind economic pains and general unhappiness with the state of the West. This is, as stated before, a complete lie, as the economic issues of preceding years such as the disastrous 2007/08 housing crisis was due to the failures of Neo-Liberal capitalism as a whole (the de-regulation of banks and assumed superiority of the free market), but the diagnosis given was a shift to the right wing again. Immigration and bureaucracy were framed as the problem behind the inefficient America and United Kingdom, and the promise of change, any change, was enough to convince many working class people to shift to the right. All of this is my own analysis, but I feel there’s enough parallels to justify comparison.

Populism has become a very dirty word in recent years, but ultimately it only means an approach that seeks to target ordinary people – the majority. The under-representation of ordinary people in the NCR’s policies is exactly what makes Caesar’s Legion so dangerous. When even the states you occupy have little faith in you being able to protect them, it is understandable that they’d be unlikely to put up a fight against an opposing force for you, if not reject your assumed ideals in general. Sallow is acutely aware of how this psychology works, it being exactly what made him the man he is in the events of New Vegas. 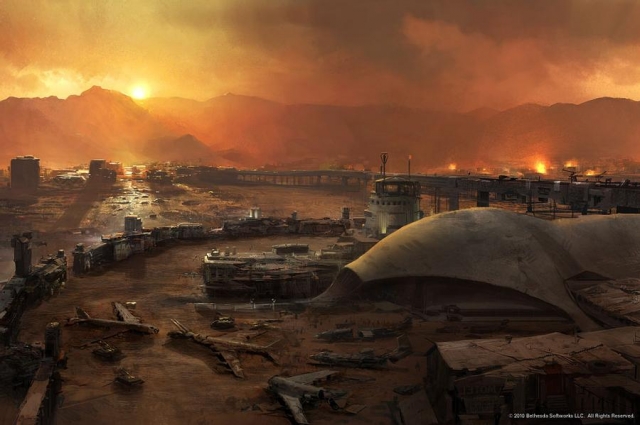 As a former member of the New California Republic who was forced out by raiders who murdered his father, Caesar is the perfect example of the NCR’s failings. Because the NCR refuse to focus their efforts on the territories they already own and overstretch themselves into other states, their inefficiency is blamed on democracy (and by extension leftist ideologies), instead of their neo-liberal policies and over-expansion. Caesar’s ideology was birthed entirely because he perceived democracy to have completely abandoned him. And, likely, there’s many others in the Mojave who feel the same frustrations he did years ago.

But, of course, there’s a third option. Where the NCR and Legion look to the past, Mr. House claims to look forward. The discussion of his ideals in detail, however, would take a whole other article, so I will save that story for another day.

I hope, even if my ramblings were incomprehensible, you learned at least something from what I wrote and thought just a little differently about Fallout: New Vegas as a whole.

I never got into the Legion's backstory, so there's some refreshment of FO:NV for me in this article.

However, I saw what Legion did all around the Mojave and couldn't support them for moral reasons, even though NCR is flawed.

As for Mr. House—I didn't like his vision, but the game forced me to... shut him down. I wouldn't mind him next to NCR leadership, although, his visions did not align with NCR's either, so he would probably be miserable. XD

Mr. House's vision for the strip is very incongruent for the NCR's notions of freedom; he's pretty much a tin dictator. Joshua Graham (formerly Malpais Legate) even compares him to Caesar.

From my perspective you probably made the better choice, the Legion are very much a false solution to the problems faced by the NCR. The NCR, like America, are a country capable of being fantastic but are constantly shooting their people in the foot.

Now that you've mentioned Graham, this game has one of the best-made DLC's ever.

Each DLC expands the lore of the Mojave and adds unique characters that have their backstories. And even if there were some things reused for the content, it always felt natural, and never got repetitive.

New Vegas is definitely at the top of my favorites list.