The Ten Best Point 'n' Click Adventure Games... According To Me - Part Two

You can read part one of The Ten Best Point 'n' Click Adventure Games... here.

Compiling a list of the best point 'n' click adventure games isn't easy. There are the usual suspects to consider of course; games that have become classics of the genre and as such have deservedly secured their places in the point 'n' click hall of fame... and then there are others. The Space Quests. The Phantasmagorias. The Legend Of Kyrandias. Games that aspire to greatness and come tantalisingly close to achieving it but then, for one reason or another, fall short. And of course, there are the games I haven't played and therefore can't comment on without looking like an ignorant muppet (like that's never happened before). Everyone seems to regard the Broken Sword series as the second coming of Christ, yet I've still not found the time to play it.

The Secret Of Monkey Island earned a place in my heart, not just because it was pants-wettingly funny, but because it didn't punish you for experimenting. It was quite possible to do something any sane person might reasonably expect would result in a premature demise, yet you were never prohibited from doing it, nor did you actually die. (Let's face it, giving a dolt like Guybrush access to gunpowder and voodoo is asking for trouble.) Guybrush would occasionally remark on the colossal stupidity of what you were about to do, but you never saw a 'game over' screen. (Excluding the scene involving the cliff and the rubber tree, where LucasArts take a sly dig at Sierra for repeatedly killing their players.) I played both the King's Quest and Space Quest games during my formative years, and the one thing I remember most is dying. A lot. Dying in point 'n' click adventure games isn't fun. It ruins immersion and in a genre so heavily reliant on narrative and puzzle-solving, it becomes little more than an annoyance. Thanks but no thanks, Sierra.

Westwood Studios's Legend Of Kyrandia likewise suffered from death, along with several additional afflictions. The game employed red herrings -- items that were unbeknownst to you, entirely worthless, thus you spent the entire game carting around pocketfuls of random crap for no apparent reason. Worse, it was possible to 'use up' critical items early in the game, rendering it unwinnable. And don't get me started on the compulsory 'Giant Maze of Doom' you encountered at roughly the halfway mark. This is the sort of game design that induces uncontrollable fits of explosive profanity, which is a shame because Legend Of Kyrandia was otherwise beautiful, brilliantly voice-acted and a joy to play. The second game, Hand Of Fate, redeemed the series until the horrendous hybrid-3D abomination Malcolm's Revenge ruined it all over again.

But anyway, that's quite enough wallowing in nostalgia, I've a list to be getting on with... Max once again proves there's no problem in life that can't be solved through gratuitous violence.

Hot on the heels of Day Of The Tentacle, LucasArts released Sam 'n' Max Hit The Road. Based on comic book characters created by artist Steve Purcell, the game chronicles the adventures of Sam, an anthropomorphic dog, and his sidekick Max, who is loosely described as a "hyperkinetic rabbity thing". Working as 'Freelance Police', the pair are hired to track down missing carnival attractions Bruno the Bigfoot and Trixie the Giraffe-Necked Girl. During the course of their investigation, the wise-cracking duo criss-cross America visiting such notable sites as The World's Largest Ball of Twine, Frog Rock and The Celebrity Vegetable Museum. Sam and Max are both deeply dysfunctional characters, and the interplay between them is consistently entertaining, particularly Max's penchant for solving problems through the judicious application of extreme physical violence. Sam's sardonic commentary on American popular culture is worth the price of admission alone. You'll laugh so hard you'll likely crack a rib. True to the spirit of the books, Discworld features some great dialogue.

Based on the late Sir Terry Pratchett's hilarious novels, and featuring voice-acting performed by a veritable who's who of British comic talent (Eric Idle, Rob Brydon, Nigel Planer, Tony Robinson and Robert Llewellyn among others), Discworld sees bumbling wizard Rincewind attempting to prevent a dragon from terrorising the citizenry of Ankh-Morpork. Chock-full of characters from the books, everyone from Lord Vetinari to Death makes an appearance here, and the dialogue is as amusing as you'd expect. Discworld is a fairly long game and some of the puzzles are notoriously tricky (largely due to having to traverse multiple locations and indulge in the odd 'pixel-hunt'), so if you're expecting to cruise through this in an afternoon... good luck with that. Some reviewers found the dialogue long-winded and not terribly funny. These people are dangerously insane and should be institutionalised in the interests of public safety. 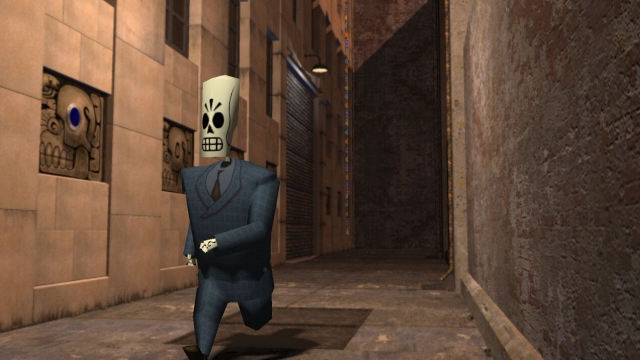 Keeping fit is important. Even after you're dead. Apparently.

Something smells off in the Land of the Dead, and it's not decomposition. Regarded by many as the jewel in LucasArts's point 'n' click crown, Grim Fandango sees the player inhabit the suit-clad skeleton of Manuel 'Manny' Calavera, travel agent with the Department of Death in the city of El Marrow. Manny's job is to make travel arrangements for the recently deceased prior to their departure for the Land of Eternal Rest, a journey they make according to how they lived. Four years of trudging through hostile wilderness if you were a menace to society. Four minutes of luxury travel on the Number Nine if you helped pensioners across busy intersections and rescued kittens from trees. When Manny discovers someone is rorting the system, assigning tickets on the Number Nine to those who can pay an exorbitant fee rather than those judged deserving, he finds himself immersed in a deadly conspiracy with far-reaching consequences.

Grim Fandango is a game that oozes style from every pore. Everything from the film noir story, to the jazzy soundtrack, to the art deco aesthetic screams quality. It helps that the game has some brilliant dialogue and the voice-acting (Tony Plana's performance as Manny in particular) is top-notch. If the game has flaws they come in the form of the difficulty (never illogical or unfair, but there are some serious head-scratchers here), and the awkward tank controls used to move Manny around the world. Much to my relief, 2015's Grim Fandango Remastered modified the controls to resemble something that didn't necessitate flailing hysterically at the keyboard. Despite its flaws, Grim Fandango is a work of art and well worth your time. 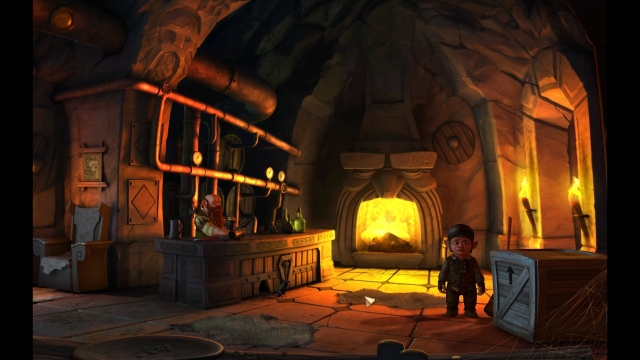 Wilbur Weathervane, would-be wizard. (How's that for some quality alliteration?)

I'd never heard of KING Art Games until I happened across The Book Of Unwritten Tales on Steam. Discovering they hailed from Germany, I anticipated the kind of awkward, lost in translation humour that tends to make a point 'n' click adventure unbearably cringe-worthy. I've never been more wrong. Not only is the presentation impressive, the writing and voice-acting is frequently laugh out loud funny, and not once did I find myself thinking "Yeah... that's probably only amusing if you're German." (The conversation with the mummy in Mortimer MacGuffin's forest home is comedy gold.)

In the realm of Aventasia, there's a perpetual war being waged between the evil Arch-Witch Mortroga's Army of Shadows, and the Alliance of Free People. MacGuffin is a gremlin archaeologist who has discovered the whereabouts of a magical artifact capable of defeating Mortroga. Aware of this, the malignant crone dispatches her dim-witted son, Munkus, to kidnap MacGuffin and seize the artifact for herself. The task of saving MacGuffin and retrieving the artifact falls to four heroes of varying stature and skill -- Wilbur, a gnome with a pronounced Welsh accent who wants to become a wizard; Ivo, a female elf of the Silver Forest realm; Nate, a cocky human adventurer; and Critter, a... erm, well he looks a bit like something that escaped from Jim Henson's workshop. Each character has their own distinct personality, and at certain points you get to choose which of the four you'd like to explore an area or solve a puzzle. The game is charming, challenging, consistently entertaining and features some gorgeous scenery. Go and play it at once! 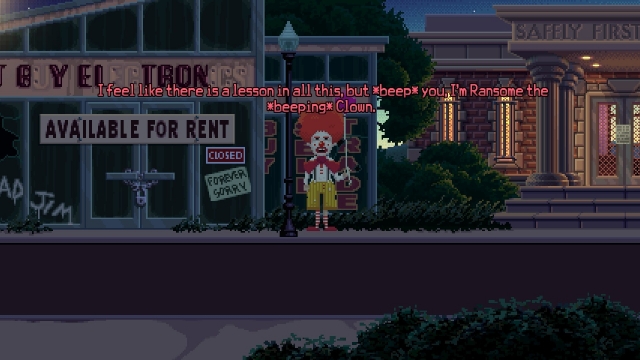 Ransome the Clown -- possibly one of the best adventure game characters ever.

Ron Gilbert of Monkey Island fame makes a triumphant return to his point 'n' click roots with the almost painfully funny Thimbleweed Park. FBI agents Ray and Reyes arrive in the titular town to investigate a murder. It soon becomes apparent that Thimbleweed Park is a seriously weird place and the local populace harbour many secrets, some of which are probably best left undiscovered. The game is heavily inspired by David Lynch's surreal '80s television series Twin Peaks, and despite the often hilarious onscreen antics, there's a pervasive miasma of 'wrongness' to the town. Nothing is as it first appears, including Ray and Reyes, and solving the game's numerous puzzles is like peeling back the layers of an onion. It's incredibly well done and keeps you engaged throughout.

There are five playable characters in Thimbleweed Park -- Agents Ray and Reyes; young would-be games programmer Delores; Franklin, Delores' hapless father; and Ransome the Insult Clown. Ransome, as you might have guessed from his name, is a thoroughly unpleasant individual who spends his days hurling abuse at visitors to the circus. A foul-mouthed misanthrope with nary a nice thing to say about anyone, Ransome is hysterically funny and effortlessly steals the show. (For those with a delicate constitution, all of Ransome's naughty words are *beeped* out... unless you purchase the Ransome Unbeeped DLC, in which case you're subject to his unsanitised tirades in all their profane glory.) Thimbleweed Park's presentation is a distinctly retro affair with a list of selectable verbs and an ever-expanding inventory filling the bottom third of the screen, and some great pixel art occupying the remainder. It also features two difficulty settings and an in-game hint system. If you're hankering after something inspired by the golden age of point 'n' click adventure games, but with all the modern quality-of-life features we've become accustomed to, you could do a lot worse than Thimbleweed Park.

So, there we have it. Ten of the very best point 'n' click adventure games, in no particular order, according to me. These titles will provide hours of brow-furrowing, head-scratching, puzzle-solving shenanigans for the whole family, and you'll all laugh yourselves silly throughout. Now, if you'll excuse me, I have a murder to solve.