What Makes Modern Warfare Such a Gigabyte Mega-Monster

We’re not the only ones in the midst of an obesity crisis: our games are too. While we grow to exceed the limits of our waistbands, our games grow alongside us, threatening to exceed the limits of all but the biggest hard drives. Thanks to DLC, regular updates and its insanely popular Warzone mode, Infinity Ward’s Modern Warfare (2019) has become the worst ever offender of this worrying ‘file size bloat’, clocking in at over 180GB (almost half of the 400GB available for user storage on the baseline consoles). As it's grown, Modern Warfare’s almost unbelievable size has become a joke among the game’s community, spawning various memes and jokes of despair as its members have watched it balloon from a modest 62GB to the mammoth 180GB that it is now. 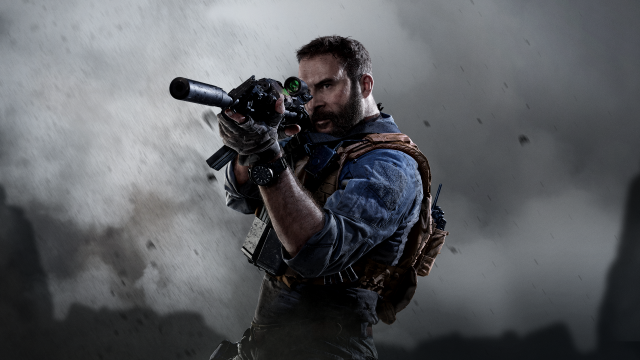 To illustrate, Black Ops 4, the previous series entry, demanded 125GB after all DLC was present and accounted for. Before that came Call of Duty: WWII at just shy of 95GB (again, after DLC). Granted, this shouldn’t be taken as an all-encompassing representation of the industry as a whole, but it’s hard to ignore the significance of an almost doubled file size for a series in just two short years. It’s not just Call of Duty packing on the digital pounds either: Destiny 2, Red Dead Redemption 2 and Gears 4 all easily cross the 100GB milestone with predecessors that go nowhere near that figure. The issue only gets more concerning when you remember that the next console generation—only a matter of months away—will almost undoubtedly bring on even larger file sizes without much more storage capacity.

What exactly has caused the size of AAA games like Modern Warfare to creep up so quickly? They’re complicated, sure, but it doesn’t feel like Red Dead Redemption 2 (101GB), for instance, is 14-ish times more complex than the original Red Dead Redemption (7.4GB). What’s going on here? Could this whole Modern Warfare debacle be an anti-competitive scheme from the brains at Activision to dominate our PC and consoles’ storage drives? No. It’s largely down to two factors: textures and audio. 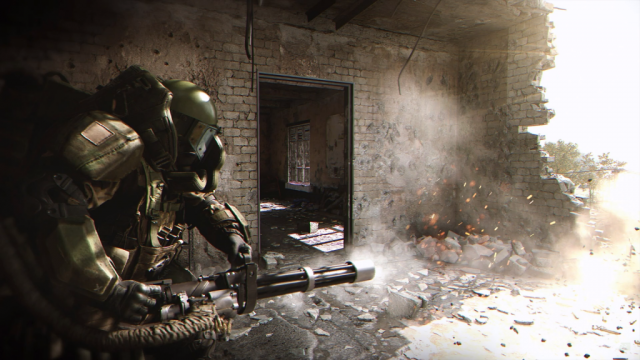 Textures are one of the main culprits behind the enormous file sizes of modern games. Not only are titles with many unique levels, maps and locations (à la Modern Warfare) packed with a staggering number of unique textures, but advances in computing power allow them to become increasingly detailed too. 4K textures can take up dozens upon dozens of gigabytes in AAA games and fancy post-processing effects like ambient occlusion and texture filtering certainly don’t help shrink this number.

Textures can be—and often are—compressed to help reduce their size within a game’s install package. However, the process isn’t as simple as compressing every texture into its own neat little JPEG file and waltzing off with a diddy, space-efficient gaming masterpiece. Traditional image compression formats (like the aforementioned JPEG) aren’t viable for games, and while the various viable compression methods do result in smaller file sizes, those smaller files WILL eventually need to be decompressed, which is where issues can arise. Compressing and decompressing any image will naturally result in some loss of fidelity, but more than that, it’s an added strain on a system’s hardware to constantly be decompressing and processing high quality textures. It may be possible for a developer to drastically reduce its game’s size with compression, but noticeably longer load-times and the potential for worse performance will be the inevitable result. 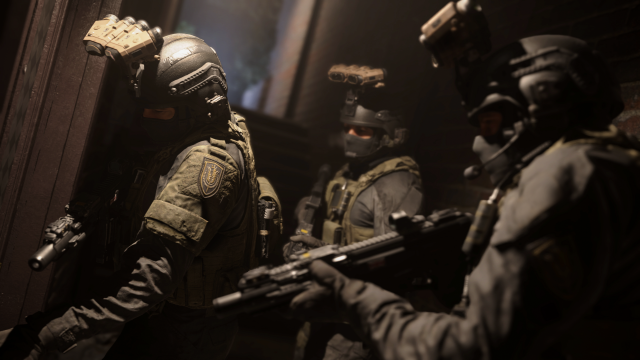 This means that developers must perform a careful balancing act when it comes to texture compression, picking and choosing which textures to compress—if any—based on factors like total file size, the impact on a player’s hardware and the importance of one texture over another (a protagonist may be formed of uncompressed 4K textures, but an unimportant NPC may find themselves low-res and compressed to oblivion).

For Modern Warfare, the sheer quantity of unique in-game textures combined with the need to keep performance snappy has led to a game that’s unrivalled in terms of overall size. Imagine all the unique textures needed to create over three dozen unique multiplayer maps, a full campaign, Spec Ops mode AND Warzone. It’s no wonder the game is threatening to clog up hard drives and turn consoles into glorified Modern Warfare machines. 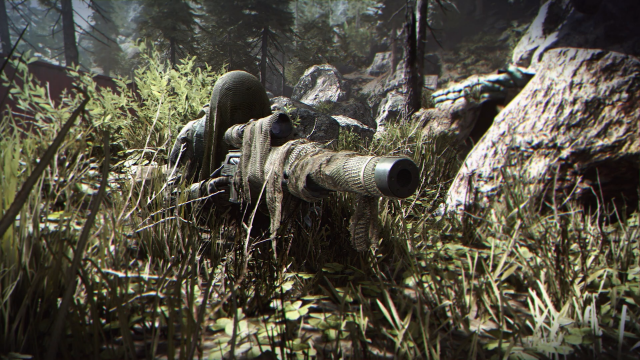 Take a second and think about all the individual audio components of a game like Modern Warfare. Just a single ten-second window might contain the sound of dialogue, music, gunfire, footsteps, explosions, weather, reloading, grunting and more. And it’s not as if the game’s audio runs in the background like a single music track; the audio experience is a product of countless discrete audio files interacting, blending and playing simultaneously. In Modern Warfare (and many other AAA games) these high quality audio files add up and go a long way to contributing to the game’s incredibly large file size.

Languages are another factor that can lead to a game’s audio being such a storage hog. Let’s say, for instance, that a game’s full English dialogue takes up three gigabytes (a number taken from The Witcher 3’s Russian language pack). If that game had fully voiced Spanish, French, Italian, German, Japanese and Russian dialogue too, that three gigabytes becomes 21. That’s a significant increase for six languages that a player likely won’t want or need. Many games circumvent this by providing downloadable language packs rather than including them by default, but for the ones that don’t, players’ hard drives suffer the consequences. 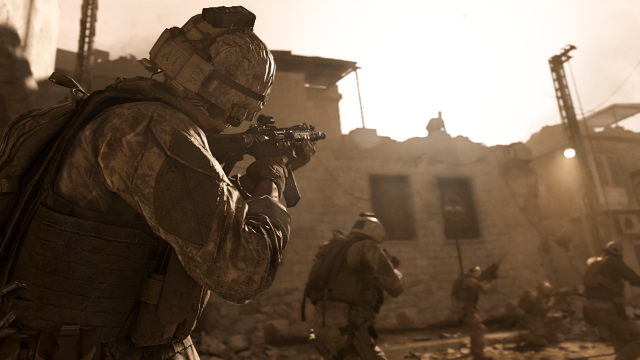 Some audio formats and compression methods result in much smaller files, but like with textures, smaller files come with their own drawbacks. Lower quality, loss of freedom in editing or an inconsistent sound on different devices can be the result of many smaller audio formats. Compressed audio also demands more of a system’s hardware to decompress, an important factor for a developer to consider if its game is already intensive enough. Upon its release, Titanfall featured zero compressed audio so that players’ hardware could be devoted to the game’s responsiveness—a move that caught some amount of criticism from storage-conscious players.

For a franchise that prides itself on high production values, Modern Warfare would need to feature top-notch audio quality. On top of that, the hardware intensive components of the game (Warzone’s 150-player Battle Royale, for example) would have consoles working overtime; decompressing audio would just pile unnecessary strain on the dated machines. For these reasons, Modern Warfare’s audio is likely uncompressed and therefore pretty huge. 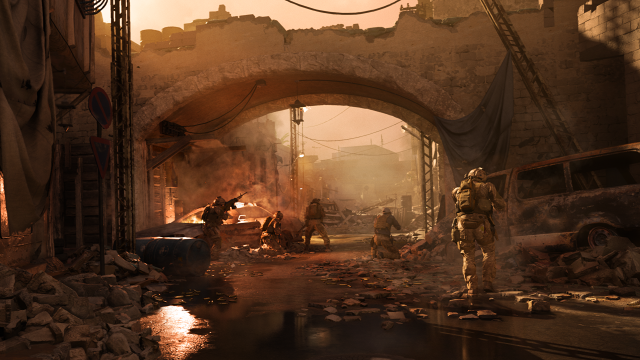 Modern Warfare’s position as an explosive gaming blockbuster makes achieving a modest file size impossible. The audio-visual fidelity needed to ensure the game keeps up with its series’ high standards means that many of the least space-efficient (but best looking and performing) methods have been used in its creation. As for why Modern Warfare specifically is just about the largest game available right now though? Well, that’s an unfortunate side-effect of those space-intensive development methods combined with the sheer scale of the game. There’s just so much of Modern Warfare that it can’t help but be massive. There’s no secret or conspiracy to expose: the game is a hard drive hog because, well… it looks good, sounds good, runs well and there’s a damn lot of it.

Call of Duty: Warzone is Here with Two New Modes

Honestly, this is a non issue. Given the amount of time the Xbox One has been out and the plentiful selection of games to go with it, everybody should have invested into some sort of external storage solution by now.

I've owned an Xbox One since late 2014 and I don't have any external storage. Most games I play are single player, so I typically delete them from my hard drive after beating them once (certain games notwithstanding.) For this reason I find games that go above 50GB to be a nuisance. Being a big Halo fan, The Master Chief Collection hasn't left my hard drive, but it's annoying to try and work around the 150GB it single handedly devours.

Is it possible to separate Warzone and Multiplayer? Because damn it man, most people play one or the other.