Why World of Warcraft is perfect for the Nintendo Switch

If you’re anything like me and you have a soft spot for a certain videogame company, then you most likely want it to do well and speculate about its next move almost constantly. So you’ve probably also wondered why that company hadn’t brought a game over to its console, even if it would benefit it. Right? Well, that company is Nintendo for me, and while I’m not one to give it a pass most of the time, I’m often left wondering why the Japanese giant hasn’t made a decision that would almost guarantee a large profit for it. This decision is World of Warcraft. Why is that, you ask? It’s because I feel the massively multiplayer title would be a perfect fit for Nintendo’s hybrid console, even if it’s in a lesser form. This article aims to explain why that is, how it could be done, and why it should happen. So with that out of the way, let’s get into it.

For those unaware, World of Warcraft is exclusive to the PC and has been for a while now, and its developer, Blizzard, has repeatedly said that it has no plans to bring its MMORPG to consoles anytime soon. Specifically, the company’s spokesperson told news sites its intentions after a now-deleted reddit post appeared, apparently showing World of Warcraft’s release for Xbox consoles was imminent. But this was quickly shot down, saying Blizzard has no plans to bring World of Warcraft to consoles anytime soon. However, that doesn’t mean there haven’t been some close calls. The obvious one is Microsoft’s acquisition of Activision-Blizzard earlier this year which sparked several fan theories between gaming journalists and fans alike of the White Whale being closer than ever. Plus, in the same subreddit of the Xbox listing, fans have been testing the game on their PCs with some surprisingly good results. One fan managed to map World of Warcraft’s controls to their Xbox controller, and the port looked pretty good. So what does all this have to do with Nintendo, though? How would those controls work with the Switch’s Joy-Cons or Pro Controller?

So why would this game be ideal for the Switch? It would be perfect because of the console’s portability. Imagine you’re on the bus, right? You’re on your way to work and feeling bored, and you remember you brought your favourite little portable system in your backpack and start levelling up and grinding for some gear while on a two-hour bus ride. Of course, there is the issue of World of Warcraft’s multiplayer component. I think I have a solution for this: make a more single-player-focused version of World of Warcraft that still includes all the best features of the original game while being able to play it wherever you want. I know that would upset many people, and I’d be upset if my favourite game was gutted about its most important feature, but please consider how awesome it would be. Think about the money for Nintendo, too! I get that it’s hard to put yourself in the shoes of a multi-billion dollar corporation, but the better it does, the better the games we, as fans, get to play, so everybody wins! Some of that money would have to go to Activision-Blizzard, unfortunately, but that’s a whole other topic for another day. 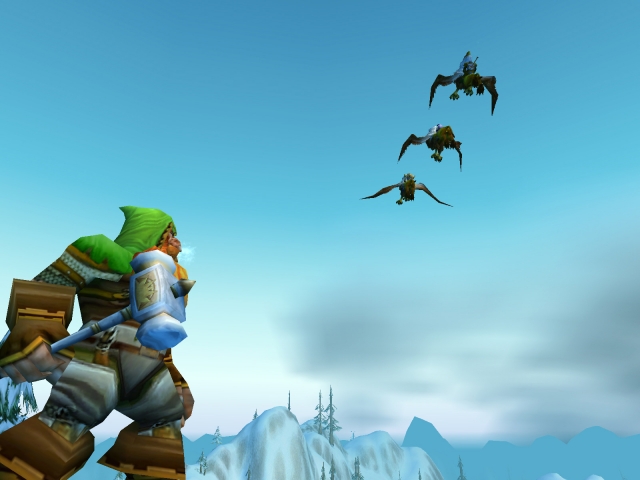 As for the button mapping, the touch screen would suffice. It would make the home console part of the Switch feel lesser for some, but given how many bad ports the console has received over the years, I don’t think it would be that big of a deal. The touch screen would be similar to how it worked in Super Mario Maker 2; it would allow players to switch between different potions, abilities, weapons and the mini-map. I know it sounds cumbersome, but don’t forget the console has two analogue sticks, which most keyboards don’t have. The sticks would allow the player to move their avatar and the camera independently of each other. Before you write in the comments that you play with a controller almost exclusively, think about how many people own a Switch but don’t have access to a gaming PC, and the game’s official website lists PC controls which implies that it’s what most people use. I see you out there. How would this work with the Pro Controller? Well, like I just said, the two sticks would offer a level of freedom that can’t be found with a keyboard and mouse in most cases, and gyro controls are a thing.

In terms of how World of Warcraft would benefit Nintendo, its hybrid console has been stagnating in sales lately, if it really does want to have the highest-selling videogame system of all time, then having one of the most popular multiplayer games in the world would help it to cross that line while bringing an entirely new fanbase over in the process. Whether or not selling that many products is a good thing is a valid argument, but I’m talking business here. If Nintendo wants to have that much success, then this is the way to do it.

To recap, Blizzard has a history of playing with the idea of bringing its MMORPG to console. The fans have already done it, so we know it’s possible. Plus, making a single-player focused version of the game would help ensure the Switch’s portability remains intact, and the button mapping is a non-issue. It would also benefit Nintendo in many ways but mostly in terms of sales and growing its fanbase. It may not be a perfect idea, and it would definitely take a lot of person-hours and hard work, but I’m sure the brilliant minds at Nintendo and Blizzard could pull it off. So bring the world of Azeroth to the Switch! The people want it.