For quite some time, the main gripe I’ve had when playing games from the comfort of my sofa is that, for FPS games at least, I haven’t been afforded the accuracy that comes with using a mouse and keyboard for input. Nerdytec have, however, come up with an elegant solution to that problem. 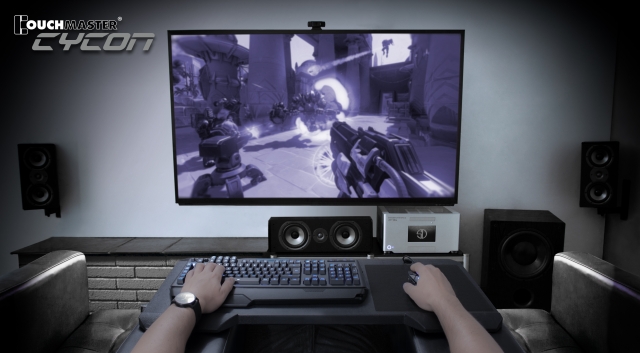 Enter the Couchmaster. The model we have here is the Cycon, which is their all-singing, all-dancing version that comes with all of the gadgetry you’ll need for comfortable couch based gaming. Out of the box, you’ll get the two armrest pieces, the support case (which houses the USB3 hub), a 5 meter active USB3 extension cable, mousemat and a pocket for your mouse to go in when not in use.

The two armrest pieces are fairly simple, comprising of a foam inner and faux leather outer (other fabrics are available) that are fairly sturdy, but still allow your arms to rest on them without causing discomfort. Before use, I had worried that the armrests may have ended up pushing my shoulders up, however, in use it became apparent that this wasn’t the case. 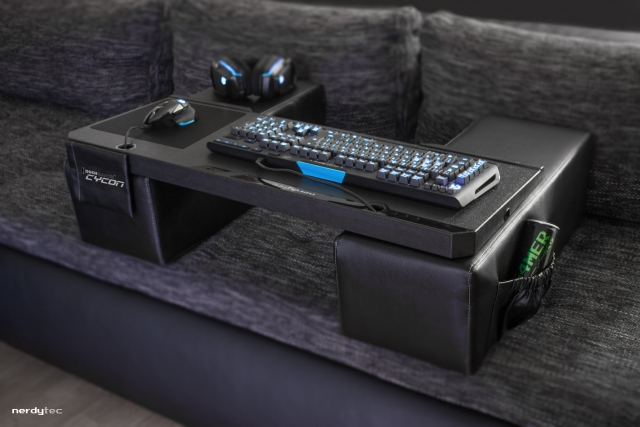 The real meat of the Cycon is in the support case. In order to set this up, you need to remove two panels from the back of the case, and wire in your mouse and keyboard to the internal USB3 hub. Take note, that you’ll also need to connect the USB3 hub extension wire that allows it to be connected to the longer 5m extension at this point. Something I’d forgotten to do and had to re-open the back of the support case to solve...

Once the keyboard and mouse is in place, you can hook up the Cycon’s USB3 hub to your PC using the supplied 5m cable, and then get yourself comfortable for some gaming. Sitting at the Couchmaster feels a little weird at first, as you adapt to the more outward placement of your arms and hands. Initially, it’s a little difficult moving your hands to the keyboard to type, but this is likely caused by years worth of muscle conditioning from sitting at a desk. It becomes second nature quickly enough, and you’ll be using your mouse and keyboard as naturally as if you were at a more standard setting of a desk. Getting in and out of a seated position is relatively easy too, as you can slide the support case over one of the arm rests to facilitate movement. Since the pieces are separate, you could also use the support case on it’s own over a chair that has armrests already. Nerdytec do sell the support case solo - should you already have a single-seater chair that means the armrest pieces would go unused. 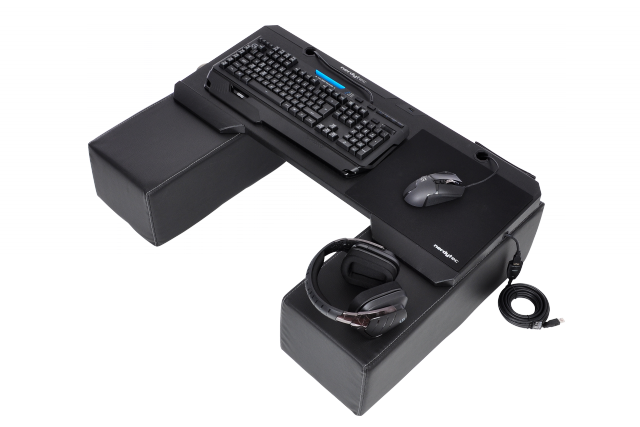 A major plus point is that the unit can be used for more than just a keyboard and mouse combo, with the addition of a USB port on the top of the support case, you could quite easily connect a joystick or gamepad to your PC such that you could control games likeElite: Dangerous whilst retaining the full command set afforded to you by having a keyboard at hand. Alternatively, you can pop your laptop on top of the support case and use it from the comfort of your sofa too. Though, if you’ve wired in a keyboard and mouse, you’ll need to find somewhere to “hang” them whilst using a laptop - or unwire them from the base completely.

I’ve since spent a couple of our Theme Nights here at GameGrin using the Couchmaster Cycon, playing games such as Counter-Strike: Global Offensive and Call of Duty 4: Modern Warfare, interspersed with time spent playing single player outings. Sitting in front of a home-theatre system and large screen had me wanting to relive some of the experiences of games gone by, to see them in a new light. So with that, I fired up Half-Life 2 and got to work saving City 17 (again). Sat on the sofa, with the Couchmaster in place, watching Gordon Freeman get ported to the other side of the office on a large TV with full surround sound brought new life to the game, instead of being hunched over a small 22 inch screen with only a stereo headset for audio, and that’s part of what makes the Couchmaster Cycon such a great addition to the gamers set piece. I also figured that a good test of the stability of the Cycon would be to play some strategy games, like an old favourite Command & Conquer: Red Alert 2, constant mouse shifting and keyboard presses meant nothing to the Cycon, which sat there and ate them up like it was a fully fledged desk. To wind down from all that, I moved onto some Factorio and well, 5 hours later I was still sat as comfy as ever laying waste to hordes of biters and placing transport belts, which speaks volumes for the comfort and usability of the Cycon. 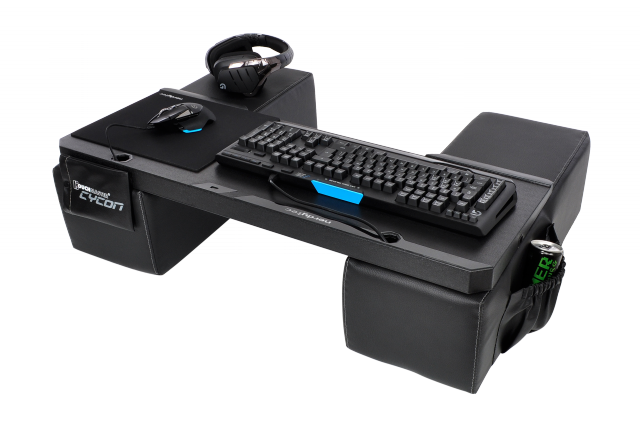 Lastly, there’s some additional gadgets available for the Couchmaster; an ash-tray, phone holder and a tablet holder round out the selection of what’s available as optional extras. I quite like the idea of mounting a tablet to the Cycon, for those times you need to look up crafting recipes in Minecraft or where that last damn flag is in Assassin's Creed.

The Couchmaster is one of those things I wanted, but didn’t know I needed one, until I had one. In all, a really nicely put together bit of kit that enables me to enjoy (and re-enjoy) gaming in the comfort of my home theatre system, without having to be hunched over a desk for any length of time.

I really want one of these, but I'm not sure that my missus would let me get away with spending the best part of a hundred quid on one :\ 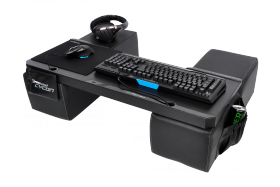