It’s probably safe to say that I’m not entirely what you would call a “pro-gamer”. Mainly because gaming isn’t my profession, but also the fact that I tend to spend 20% of my time in most games getting lost is well documented. Nonetheless, I do tend to game a lot, and so I’m the kind of person who buys the slightly more expensive peripherals in the hope of a better experience with them. I also really like bright colours, so I do love a bit of RGB, and this usually means going for the “pro” gear, so that’s what we have here with the QPAD DX-120.

This is a 12,000 mouse using the Pixart PWM 3360 sensor, the same sensor used in Asus’ ROG Gladius 2 and HyperX’s Pulsefire surge, both of which are cheaper. So what does this mouse give you that those cheaper options don’t then? Well, honestly not an awful lot. There’s a very nicely done smooth RGB band on the bottom of the mouse, but that’s pretty much your lot. I’m a little confused as to how they came about the “pro gamer” designation if I’m honest. 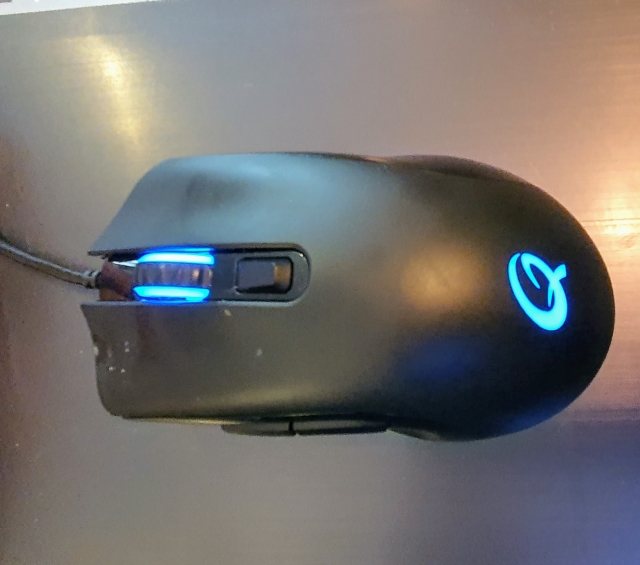 In terms of use, this is a very solid mouse. There’s a decent weight to it, and it fits comfortably in the hand for a variety of hand sizes. I have quite large hands and my partner has particularly dainty ones, and both of us found it comfortable to use. We are both right-handed though, and whilst the shape of the mouse is such that it can be used in either hand, the forward and back buttons are on the left, meaning that left-handed users would need to use their ring finger to press them, which might not be overly comfortable.

Speaking of buttons, you’ve got the expected minimum here and nothing else. The top features a standard array of two buttons and a clickable scroll wheel. The scroll wheel is graduated with no option to adjust it, and has a DPI button below it. There are the two buttons on the side previously mentioned, and these are comfortably positioned for pressing with your thumb. There’s no software for the mouse at all, it’s purely plug and play. Whilst this made things easy to use, it does mean that there’s no way of changing the button assignment so what you have out of the box is what you get.

That lack of software also means that the RGB isn’t changeable. It doesn’t seem to support any of the major standards, and I downloaded the software for every single other model of mouse that Qpad sells off of its website and none of them recognise the DX-120. I quite like the rainbow wave effect that it has initially, but I do like to change the colouring of my devices depending on what I’m doing and this just isn’t an option.

There’s nothing wrong with the DX-120, but it’s just not what it claims to be. It’s not a gaming mouse, it’s an ordinary mouse with a braided cable and RGB in it. It’s smooth and comfortable, but there are plenty of mouses you can say that about, many of them cheaper than this. In order to count as a gaming mouse, I would expect to see some options for key reassignment and profiles. At this price point I’d also like to see adjustable weights and some extra buttons. As it is, it’s difficult to recommend this at the price point it’s been placed at. If you can pick one up on sale then it’s certainly a solid mouse and quite pretty, but don’t expect any features.

This is a decent mouse, but there are others in the same price point that have a greater number of features. The basics are all there, and done very well, but there's nothing else and for the money, I expected more.

this is not a review, plese dont do this bullc**p. Thee is ZERO information people need about the mouse. Its just a waste of time like pure advertisement.

I'm sorry to read that you were disappointed with the review Dominik, what additional information do you feel that it would benefit from please?