Let’s be honest, there are a large portion of gamers who are careless with their gadgets. Controllers casually tossed aside; under sofas, beds, in the path of desk chairs. Discs scattered about the room, some in cases, some in the wrong case, others stacked on top of the console with faint scratch marks appearing across the surface. Will they still play? Who knows, there’s a copy of FIFA 15 there. Not played it for four years now. Don’t want to move it.

If that rings any bells, snakebyte has produced a potential solution for you – so long as you are disciplined enough to actually use it – the GAMES:TOWER 5. This nifty plastic accessory allows four controllers to be placed upon hooks, of which there are two on each side. They don’t only hold DualSense controllers, but I’ve tried with a DualShock 4 and the Series X | S controllers, which all fit perfectly. 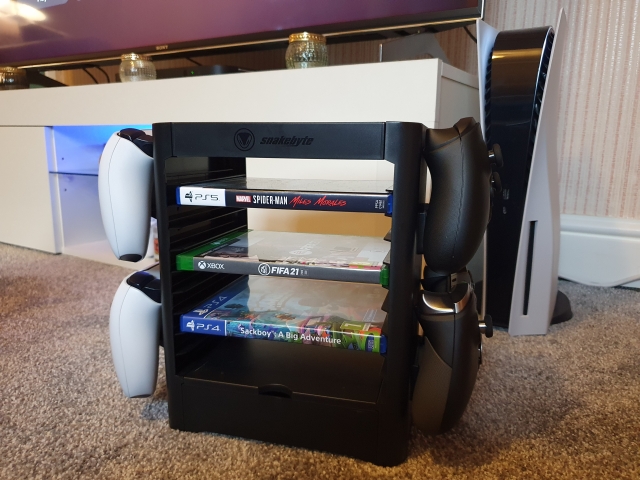 The tower itself has space for 10 games to fit no matter the platform, with a drawer at the bottom which the promotional material shows the PS5 media remote residing in. In reality, you could put cables in there or anything like that. It’s not that big though so you won’t fit anything more substantial than that.

In fact, the whole tower isn’t terribly large. It comes in at 20.5cm tall, and 30cm wide. You could take the hooks off the side if you have no intent on using them, shaving off 5cm either side for a 20cm width instead.

Construction is easy enough with the basic steps listed on the side of the box. Though you do need to make sure that you take note of the little left and right letters marked on the plastic, or you’ll end up putting it up back to front like I did, wondering why the games were going in backwards…at any rate, once that was corrected, everything just worked like it was supposed to. 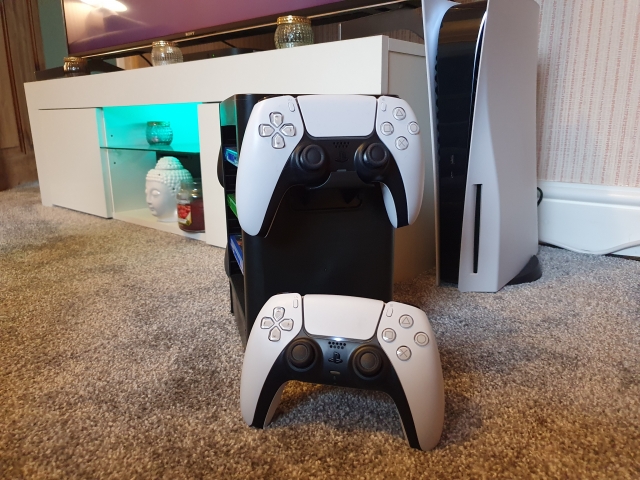 The only thing I can criticise is the quality of the plastic is not great, but it holds everything that it’s supposed to and doesn’t topple over when you only put controllers on one side of the tower. In truth, once it has been constructed, you’re never likely to notice that again. I’m also thankful that the logo is kept in black at the top rather than some loud overly gamer aesthetic you often get with this kind of product. There’s also a curious rectangular ridge at the top, perhaps there was going to be something to stand headphones on? I’m not sure.

Could I recommend it? Yes, certainly, if you want something to quickly dump your controllers onto and stack your games nice and neatly. I’m sure there are plenty of messy bedrooms or perhaps even living rooms that would benefit from the organisation that the snakebyte GAMES:TOWER brings.

A neat and tidy way to organise your games and controllers, for the price it does everything it needs to.