With the amount of multiplayer games available on Switch, it’s not always economical to get Joy-Cons. Luckily, snakebyte has a solution in their MULTI:PLAYCON controllers. You might wonder why I said controllers, when everyone knows that two halves make one Joy-Con - that’s because two PLAYCONs make two controllers.

In the box you get the manual, a micro-USB cable and the two controllers. They’re available in orange & blue-grey or black & white. They’re well put together, and the design of them looks like a smile, with the Mode button (used to connect them to the Switch) as the nose. Since it’s October, of course it’s quite reminiscent of a pumpkin. Admittedly, the very stylised look of the letters on the face buttons is very weird and chunky, but it works. The micro-USB is used to charge, as well as update, the controllers.

It’s a weird decision that snakebyte put the Home and Snapshot buttons on separate controllers, but this was likely because the Joy-Con has them like that. Still, since each PLAYCON is intended to be used seperately, it’s weird. They also lack motion control, an NFC chip for amiibos and HD rumble, so will feel different to a Joy-Con in more ways than just the outside would suggest. 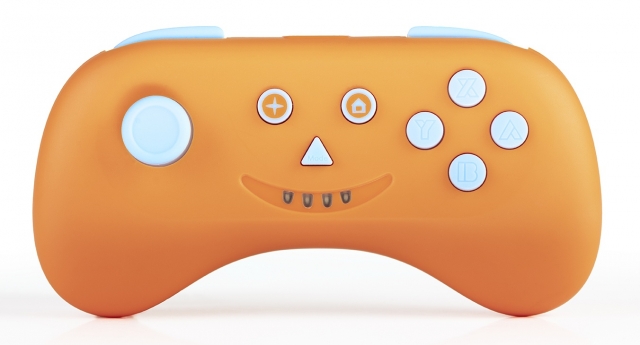 Once the MULTI:PLAYCON is connected to your Switch or Switch Lite, they work as you might expect. If they disconnect from inactivity (it’s quite a short window), it’s simple enough to reconnect them.

Playing with the PLAYCON feels better than a Joy-Con, because it’s a bit bigger, and contoured to fit your hand. Again, each one is for use separately, which is a good thing as they would be a bit difficult to hold sideways, and have no way to connect onto the sides of the Switch.

The only thing you might notice is that the lights on the front of each PLAYCON can be bright if you’re playing in the dark. But in a pitched race of Mario Kart 8 Deluxe you won’t notice them.

There’s not really much else that I can say about snakebyte’s MULTI:PLAYCON. It’s aiming to replace both sides of the Joy-Con, but not the Joy-Con itself. After all, one box contains enough controllers for two players, but not a single-player controller. If you need a new Joy-Con, then this isn’t it. However, if you need some controllers for Player 2, Player 3 and more, then they’re definitely worth checking out.

Although they might look like something you’d give your younger sibling, they’re good enough for you both to have a game of something.