It’s been a while since I reviewed a headset, so when the opportunity arose to check out the Atlas Three from Turtle Beach, I jumped at the chance. It’s a nice looking headset after all, and it’s compatible with the PlayStation 4, Xbox One and Switch as well as the PC.

First off, I’ll note that chat functionality on the Switch doesn’t work with the headset, but it does work for the other two consoles and the PC. Also worth noting is that you have to charge it to use it for up to 40 hours.

In the box you get the headset, which has a cable ending in a 3.5mm jack. If your Xbox One controller doesn’t have a 3.5mm port in it, then you need a Headset Audio Controller. The box also contains a PC splitter cable to plug it into your earphone/speaker and microphone ports. Finally, there’s the micro USB charging cable, a quick start guide and a Turtle Beach sticker. 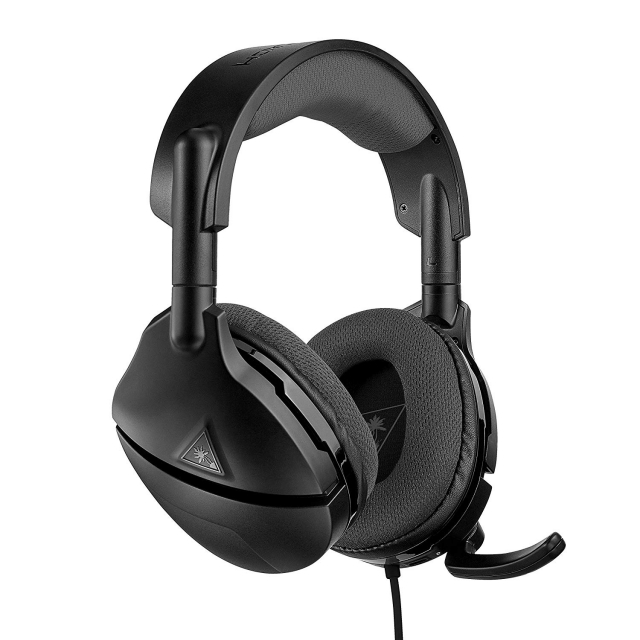 The headset’s construction is very solid, though I did notice some creaking in the left earcup when I adjusted it on my head. The headband is adjustable, and is unlikely to shift around on your head as it is nice and stiff. The earcups and headband have a nice, soft cushion covering which is softer where spectacles might be, to make them comfier for glasses wearers.

The right earcup has the volume control for both the earphones and the microphone (which is for you to hear yourself, not the output), as well as the flip-up microphone itself. The sturdy microphone moves to three points, with all the way back muting it. It’s quite short, but nice and clear. There are also the power and audio preset buttons.

While the headset isn’t uncomfortable to wear for long periods, I have noticed that it’s not as comfortable as my previous headset. It’s difficult to explain how it feels different, maybe it’s because the material is felt instead of leatherette? I’ve still been able to wear it for hours at a time without discomfort.

One issue I do have, however, is that the headset turns itself off automatically. Of course, this is a power saving measure, but I’m not sure what it looks for before powering down. It’s happened after a few minutes of not being used, but it’s also happened several times despite there being sound playing. Whether music, the Twitch app or a game, and after different periods of time, it gives a tone and turns off. Even more curious, I had turned the volume dial on the headset only 30 seconds prior to one of the shutdowns. The headset boasts some audio boosting options, such as being Windows Sonic Surround Sound Ready, and having the aforementioned Audio Presets. These are audio equalisers, and pressing the button rotates between the three: Turtle Beach Signature Sound, Treble Boost, and Vocal Boost. I’ll admit that I’m not much of an audiophile, so the difference in the three wasn’t very noticeable. Perhaps if I listened to music at a higher volume?

The Atlas Three had no problems with any audio I threw at it, whether songs, music, videos or games. All were perfectly clear and audible, though after my last headset they do seem quiet. My old headset required the PC to be set to volume two, or risk deafening me. The Atlas Three, even with the volume dial turned all the way up, I could comfortably listen to things at volume 16 or above. That’s not a negative, just an observation.

At £69.99, the Turtle Beach Atlas Three is a decent headset that works well with consoles and PC alike. If you’re in the market for a non-USB headset, then you can do worse than this.

A decent headset that works equally well on consoles as on PC, and perfectly suitable for glasses wearers, too.

"The earcups and headband have a nice, soft cushion covering which is softer where spectacles might be, to make them comfier for glasses wearers." - That's a really nice touch, more headsets and headphones should have this feature.