I’ve always liked the look of third-party controllers, but it’s not like I have a ton of experience with them. Suffice to say, I’ve never used an unofficial Xbox controller before. However, I knew Turtle Beach as a company that produces reliable peripherals, so when we were offered the wired Recon controller, I was more than happy to take a look at it.

The Turtle Beach Recon comes with a long USB-C cable, a quick-start guide, support card and a sticker. It also has a nifty reference card, in case you need to quickly refer to which mode it’s currently in. It’s designed for use with Xbox X|S, but fully compatible with Xbox One and PC. As such, you can plug a headset into the controller and use all of the functions.

The build quality of the Recon is nice and firm, with all of the buttons, triggers and sticks feeling exactly as they should. The triggers have a textured surface to them that’s much bumpier than the official ones. Similarly, the analog sticks are also textured. Presumably along the same non-slip lines, the parts of the controller which sit in your palms have a rubber surface on them. 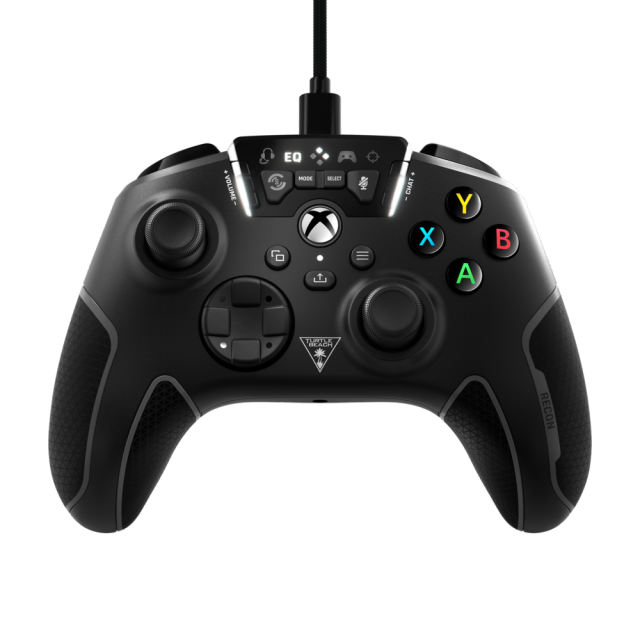 As well as the expected buttons, and the screenshot button, there are two buttons on the underside of the controller which you can reassign to use as other buttons. By default one of them does nothing, while the other is the Pro-Aim button - holding it will slow down the motion of the right analog stick. Ideal for getting headshots and the like.

There are also controls for the headset, if and when one is plugged in. These are used for microphone and headphone volume, but that’s where the aforementioned reference card comes into play. You can choose one of several preferences and modes, but most interesting is the Superhuman Hearing mode. Okay, it’s just an audio boost, but it sounds cool, right? It does increase the volume or bass or something - someone who is more of an audiophile could probably put it into better words, but it’s a decent feature.

Using the Recon controller itself, however, shows it to be a decent alternative to the wireless official controllers. I tried it with several games across the Xbox Series X and PC, and it worked a treat. Of course, the length of the cable means that it was more suitable for sitting away from the console, rather than at the desk with the PC, but the cable has a velcro strap attached to keep it tidy. I should probably mention that I did use the Recon controller with the Turtle Beach Recon 500 headset, which I previously reviewed. I would assume that Turtle Beach wants you to use them together, but I did try out another headset and it worked absolutely fine.

If you’re in the market for a new controller, then I can definitely recommend the Turtle Beach Recon controller. Whether you’re using it with one of the Xbox platforms or a PC, it’s ideal.