Get a Job in Dead or Alive Xtreme Venus Vacation

It's time for you to get a job. Or the girls to get a job, as technically you're the owner? In either case, it's time for the Venus and the Silly Dog's First Job (First Half) festival in Dead or Alive Xtreme Venus Vacation.

Now that the Anniversary has passed, preparations are being made for a New Festival on Venus Island. The boss asks Tamaki to show Nagisa around the island, but during the tour she's asked to help out with a certain job...

And as if that didn't give you enough of a hint, there's a new girl: Nagisa! Due to her arriving to the island there is a special login bonus running for two weeks.

As usual, wearing certain swimsuits, obtained from the Trendy Gacha and Star Outfit Gacha, will get you bonuses for playing volleyball games. This time, the following outfits are the ones you want: Crystal Snow (Nagisa), Dawn Set (Hitomi) & Dusk Set (Tamaki). 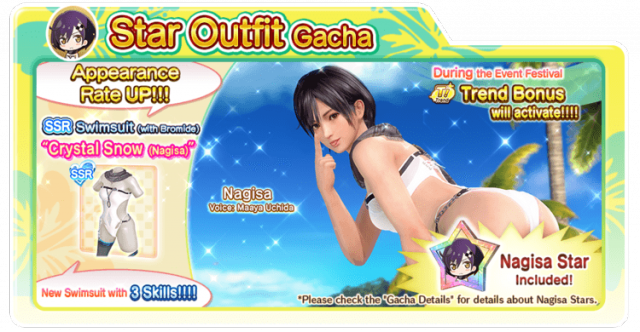 Get a Job in Dead or Alive Xtreme Venus Vacation