Hearthstone: Heroes of Warcraft concludes its Year of the Dragon event with the upcoming expansion, Descent of the Dragons.

2019 began by introducing players to the League of E.V.I.L. The shadowy organisation battled righteous heroes throughout the Rise of Shadows and Saviours of Ulduum expansions. Now, they're set to bring ultimate destruction to Azeroth by resurrecting Galakrond, the father of all dragons. The heroes of Azeroth must clash once more with the League of E.V.I.L to rid the world of dragons and ensure goodness prevails.

The power of Galakrond can be used in battle via five new Hero cards for any of the five E.V.I.L classes: Priest, Rogue, Shaman, Warlock and Warrior. Each class will utilise the dragon's power differently in accordance with their existing skills. The five hero cards will be free for any player who logs in before 31st March 2020.

The Descent of Dragons expansion will release 10th December for Android, iOS, PC and MacOS. It's available for pre-purchase on all platforms now. 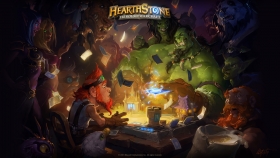