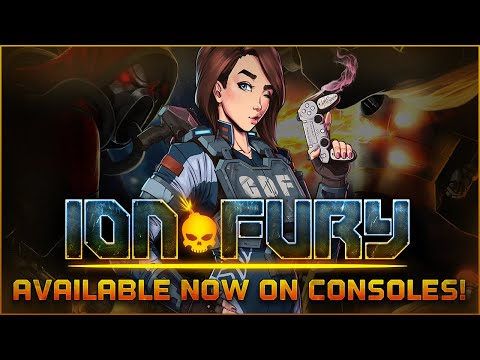 Ion Fury Blasts on to Consoles

1C Entertainment's Ion Fury is a true throwback to the first-person shooters of old like Shadow Warrior, Duke Nukem 3D and Wolfenstein 3D. Like those titles, it's even being published by 3D Realms. Originally releasing on PC in February 2018 (after a name change from the copyright infringing 'Ion Maiden'), the chaotic, old school FPS is finally out for PlayStation 4, Xbox One and Switch. Check out the console launch trailer above.

Play as Shelly "Bombshell" Harrison, a hard-boiled bomb disposal expert out for revenge on Dr Jadus Heskel and his legion of cyber-cultists. Revenge for what, you ask? Spilling her drink between shifts of course. What else? Taking to the streets of Neo D.C., Shelly will rain all manner of gunfire, explosives and  shrapnel down on the ne'er do wells that reign supreme.

Despite using the beloved Build Engine that brought a myriad of beloved 90s shooter to life, Ion Fury also takes from modern gameplay standards that have arisen since: auto-saving, high resolutions and body-specific damage to name a few. The level complexity of Ion Fury also exceeds the limits of what the Build Engine was capable of the 90s. Players will blast through huge levels packed with secrets, bonus areas and unprecedented levels of verticality.