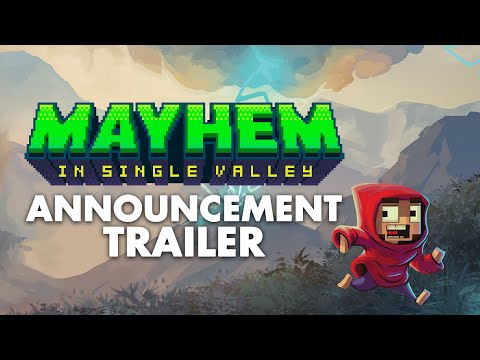 The first proper trailer for Mayhem in Single Valley packs a lot into 72 short seconds. The upcoming PC exclusive from Fluxscopic looks to weave a charming tale full of unique characters, mysteries, radioactivity and zombie squirrels inside a top-down, Legend of Zelda-esque package.

Jack, the game's protagonist, is all set to leave his small town for the big city. Unlucky for him, radioactive spillage has just mutated the town's wildlife into uncontrollable zombies; before long, the town's residents are infected too. To save his town and its residents, Jack must embark on a journey through streets, caves, labs and strange dimensions. All is not what it seems in Single Valley, even without the zombies running amok.

In addition to dynamic, physics-based puzzles and combat encounters, Mayhem in Single Valley offers an in-depth character interaction system. The numerous NPCs Jack meets on his quest are fleshed-out with their own traits, desires and personalities which can be useful in solving problems and bypassing obstacles.

Describing Mayhem in Single Valley as a Legend of Zelda-like doesn't seem to do it justice. From the trailer and pre-release information, it looks to iterate on the familiar Zelda formula while packing it with so much of its own innovation and charm that it fully deserves to stand alone from its peers.

Check out the reveal trailer above, and look out for Mayhem in Single Valley when it releases on Steam some time in 2020.