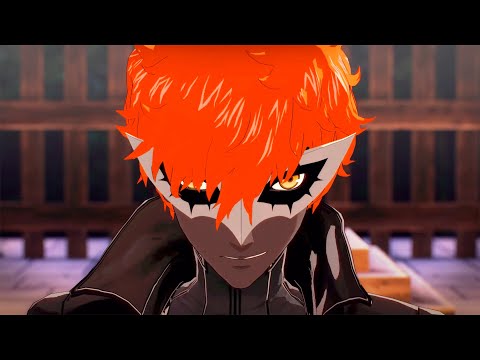 The latest trailer for Persona 5 Scramble: The Phantom Strikers released by Atlus details new additions to the game including; a new metal remix of Rivers In The Desert, a quick glimpse at some of the new enemy characters and what looks to be carrot bondage.

The trailer also gives us some hints towards what is going on in the story showing our main characters interacting more with newcomers Sophia and Zenkichi Hasegawa in the metaverse.

It’s important to note that the trailer leans heavily on the idea that this is a true sequel, everyone from the last game keeps their development and even shows that they have grown more since then. Futaba is more confident, Haru is more assertive and Ryuji is said to be kinder and less brash.

We can see more in the way of level design too featuring a snowboarding stage, some platforming and Makoto driving her motorbike-like Persona Johanna through a crowd of shadows.

Check out the trailer for more on the menu design and how combat looks but be careful as there is a very spoiler-looking scene with Joker so if you do want to keep your knowledge of the story to a minimum you may want to skip this one. Persona 5 Scramble: The Phantom Strikers is coming to PlayStation 4 and Nintendo Switch in Japan on 20th February 2020. No word yet on a western release, though it is likely to be coming to us sometime in 2020.