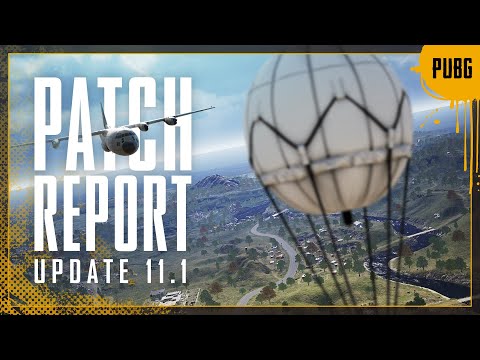 Update 11.1, and therefore Season 11, is live for PLAYERUNKNOWN'S BATTLEGROUNDS on all platforms, bringing a new two-month Ranked Season, new rewards, the return of a fan-favourite map, new features and more to the long-running battle royale game. Take a look at the official Patch Report above, and read on for an overview of the update's key changes.

The start of Season 11 marks the start of a new Ranked Season and the launch of a new rewards table. From now on, Ranked Seasons will run for two months, which means they will no longer line up with the Survivor Passes. In addition, item spawn rates have been increased by 30% to 40% in ranked mode, making spawn rates roughly equal to that found in Esports mode.

The fan-favourite Paramo map, which features randomised terrain, has been reintroduced to Normal and Custom matches with support for up to 64 players. There have been some changes, though. Notably, there is now the possibility for a randomised location to appear; plus, additional cover has been added to open fields

Unfortunately, the return of Paramo into the map rotation brings with it the phasing-out of Karakin, although it will return in the future.

While the Beryl and SLR have been nerfed, the Mini-14, VSS and SCAR-L have each received small buffs.

Metal Gear Solid V fans will be familiar with this feature: Fulton Balloon pickup. Available to loot in Erangel, Miramar, Sanhok and Vikendi, the balloon can be used by up to four players. The item summons a plane which will pick players up and carry them to the centre of the safe zone. Be careful, though, ascending with the balloon will make you an open, defenceless target.

10 new mastery medal types have been added to the game. These will reward players based on their positive (or at least noteworthy) in-game actions.

Players can now display up to two medals on their PUBG ID, as well as customise their profile itself from the "Customize" tab.

On top of everything mentioned previously, the update also brings new skins, an expanded friends list, a "Mutual Friends" feature, UI/UX improvements, various quality-of-life improvements and a slew of bugfixes.

Update 11.1 for PLAYERUNKNOWN'S BATTLEGROUNDS is out now on all platforms.