Have you noticed a mysterious download recently on your copy of STAR WARS Jedi: Fallen Order? That'll be because Respawn Entertainment has released an optimisation update for the game on PlayStation 5 and Xbox Series X|S. Curious to find out what those optimisation updates are? Wonder no longer: we've got the details here.

In addition to that silky 60 FPS figure, Series X players using "Performance Mode" will see the benefit of dynamic resolutions between 1080p and 1440p.

There'll be no 60 FPS for Series X players using the game's "Normal" mode, but for their troubles, they'll see the aforementioned dynamic resolutions upped to a range of 1512p and 2160p. In addition, they'll be able to feast their eyes upon 4K post-processing.

Unlike those playing on Xbox Series X, PlayStation 5 players won't be graced with graphical options. Instead they'll have the same 60 FPS setup with postprocessing increased to 1440p and dynamic resolution (which ran between 810p and 1080p previously) disabled in favour of a consistent 1200p resolution.

So, are you looking forward to re-donning the sharper-than-ever poncho of Jedi Cal Kestis? Or are you gearing up to experience his story for the first time? Let us know in the comments! 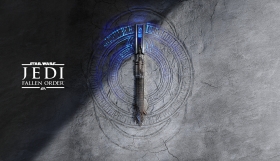