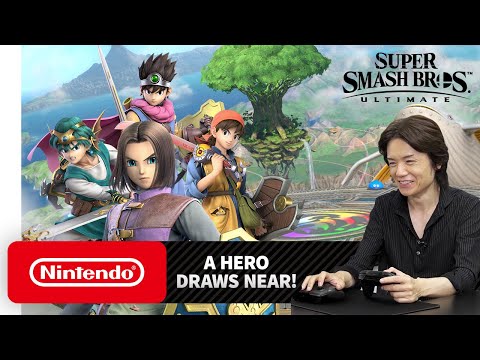 Hero is a sword fighter who wields magic, yet he has a few unique quirks that help differentiate him from other sword fighters on the roster. One of his most notable traits is his MP bar, which is indicative of the MP bar seen in Dragon Quest games. The MP bar will decrease after each special attack is used. These special attacks include Frizz spells, Zap spells and Woosh spells. Much like in the main games, these spells will come in different strengths, activated by holding down the correlating buttons.

Hero’s other key mechanic is the command menu. The command menu can be activated by holding down on the analog stick alongside the B button, and from it players can select from a large variety of spells with different attributes. These spells include Oomph, Psyche Up, Bounce, Heal, Flame Slash, Kacrackle Slash, Accelerate, Kaboom, Snooze, Hatchet Man, Thwack, Zoom, Kacklang, Metal Slash, Hocus Pocus, Magic Burst and Kamikazee. Naturally each of these moves mirrors the effects of the spells in the Dragon Quest Games.

Even more Dragon Quest characters will be represented through Mii Costumes that are available to be purchased separately. Specifically, these include Erdrick, Martial Artist, and a Slime Hat from the original Dragon Quest, and Veronica from Dragon Quest XI.

Hero will be releasing with Version 4.0 of Super Smash Bros. Ultimate, which includes a number of key features for the overall game. Some of these features are the ability to play Tournament Mode online, being able to bet on winners during spectator matches, as well as fundamental gameplay changes such as the Final Smash bar depleting over time, and numerous buffs and nerfs to specific characters.