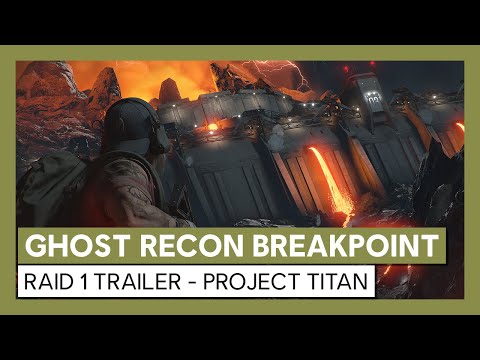 Tom Clancy's Ghost Recon Breakpoint, Ubisoft’s latest co-op, tactical shooter has just received a major content update, the first since release. For the first time ever in a Ghost Recon game, players will team up to take on a raid, Project Titan.

Presenting an end-game challenge for experienced teams with a gear level over 150, the raid will see players’ skills tested as they fight off The Titans —advanced Skell Technology drones— and four distinct bosses: Baal, Quantum Computer, Gargoyle and Cerberus. Each boss will bring a new set of mechanics to understand and overcome with tactics and cooperation.

The raid takes place on Golem Island, a brand new in-game location featuring an active volcano. Completing the challenge will reward players with the highest-level gear in the game; it’s clearly not intended for novice players. Project Titan will also reset weekly with new variables, objectives and rewards to encourage repeated attempts.

On top of this content update, Ubisoft has committed to continuing support of this game with more content and patches in the future.

The Project Titan raid for Ghost Recon Breakpoint is available now for free on PlayStation 4, Xbox One and PC. It will also be available upon release for Google Stadia when the game releases later this year.

Check out the trailer above for a closer look at the new content.