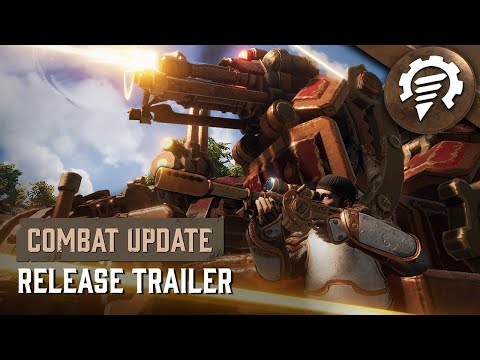 Early Access co-op survival shooter Volcanoids has just received an update which majorly overhauls the game's "weakest" aspect, the combat mechanics. Not only does it add more weapons, gear, turrets, enemies and abilities, but it also completely reworks how the combat system works. Get a glimpse of these changes in the trailer above, and read on for details of how the Volcanoids team has set about changing its combat mechanics.

Several of the staples of first-person shooting games were absent from Volcanoids previously: recoil, projectiles (as opposed to bullet scan), aiming down sights, hit indicators, bullet spread, bullet drop and more. The developer has reworked combat from the ground-up, implementing all of these features and more. Combined, the developer states that they "change the combat experience drastically".

It's a good thing that the developer took to reworking its combat mechanics, too, considering that combat against the droves of mechanical menaces makes up a huge part of Volcanoids' gameplay loop, alongside foraging, mining, crafting and exploring.

The Combat Update for Volcanoids is out now on Steam Early Access.