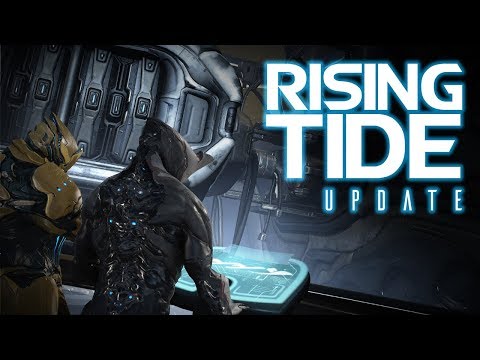 Digital Extreme's massively successful free-to-play shooter,Warframe, is set to receive its newest update soon on PC. Called 'Rising Tide', the update will see players teaming up to track down the Railjack, an ancient battleship that could turn the tide of the battle between the Grineer Fleet, the Sentients and the player faction, the Tenno.

In addition to this, each player's Railjack ship will become their personal warship when the eagerly anticipated Empyrean Update brings thrilling and fully-featured space combat at some point in Warframe's future. The Liset, players' in-game landing craft, will receive some refinements in preparation for the update too.

To build, customise and modify the Railjack ship from ancient Railjack technology, players will first need to assemble the Dry Dock, a workshop and garage hybrid of sorts. Following the Empyrean Update, this garage will also be used to outfit players' ships with weapons, modifications and fresh parts.

As is expected with updates to a shooter like Warframe, new weapons, armour and cosmetics will be joining the game's wide selection in Rising Tide. Look out for the Equinox Antonym Collection and the Cumulus Collection.

Warframe's Rising Tide update is free and will be coming soon for PC and will hit consoles at a later date.