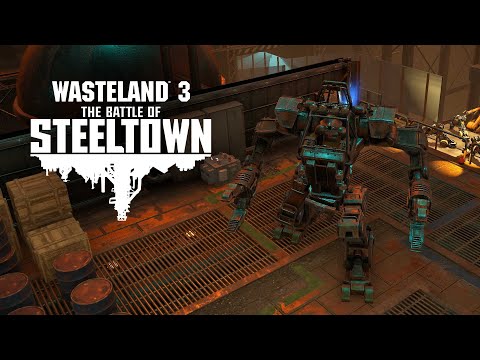 The first piece of narrative DLC for inXile's post apocalyptic RPG Wasteland 3 has been announced. While there's already a teaser trailer for Wasteland 3: The Battle of Steeltown (shown above) which reveals its release date of the 3rd June, it doesn't give much away in terms of what the DLC will actually contain. Luckily, we're here to give you the lowdown.

The story will centre around Steeltown, a manufacturing settlement devoted to providing Colorado with tech, armour, weapons and vehicles. More importantly, it provides the Patriarch with the technological might he needs to stay in power. Recently, signs of trouble have begun showing up; it appears that the workers of Steeltown are beginning to revolt. That's why the player's team is sent in, to investigate and save Steeltown's leader Abigail Markham. Of course, there's always the possibility that its workers have a point: maybe rebellion wouldn't be such a bad thing. That's for you to decide.

The first narrative DLC for Wasteland 3 is holding no punches. Keep an eye out for it when it releases on PlayStation 4, Xbox One and PC on the 3rd June.

Wasteland 3: The Battle of Steeltown