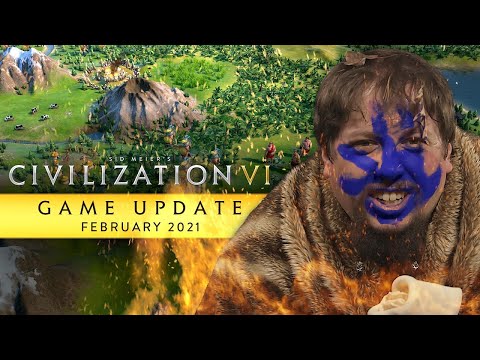 The upcoming free update for Sid Meier’s Civilization® VI is set to release on the 25th February, but do you know what it'll bring? Soon you will!

What were once simple enemy factions which needed to be killed with little-to-no thought will soon be fully-fledged factions. Six distinct Barbarian clans will be added to the game; players can choose to engage with them, helping them develop or hindering them. How players choose to engage with each of the six clans will inform what role they take on in the larger context of the game.

Players will also be able to choose which leaders are active at the start of any given game, letting them get the most enjoyment out of their Civilization experience.

Air units have been tweaked to strike more often, and air combat as a whole has been reworked. Certain governments have also seen their policy slots shifted to better reflect how they'd run in a real-world setting. Finally, Natural Wonders have been rebalanced somewhat; Firaxis highlights how the "Cliffs of Dover will now grant three Gold, three Culture and two Food".

The February 2021 update will release free for Civilization VI on the 25th February.