I’ll be the first to admit that at first glance, I can appear a little intimidating. People tend to see the shaven head, long beard, tattoos and piercings and assume that I eat kittens and worship Satan. In actual fact Satan and I are indifferent to one another and I’m actually something of a soppy bastard, especially when it comes to animals. We currently have two bunny rabbits and two cats in our house, and it’s not entirely uncommon for conversations to revolve around just who is a cute little fluffball and who has the most adorable toe beans (spoiler, it’s usually Karma). With this in mind, a game that contains all the violent swordplay of The Witcher series combined with adorable animals is right up my alley.

Animal Rescuer is the brainchild of Turkish Developer Turquoise Revival Games, a new company breaking on to the scene with this debut title. As the title suggests, you are responsible for rescuing animals, but not in the manner that you might expect. The game’s intro explains that your wife is very sick and your task is to rescue animals in order to light up symbols on a magical tablet which will somehow cure her. It’s videogame logic, but if I get to pet the dog then I’m not going to complain quite frankly. 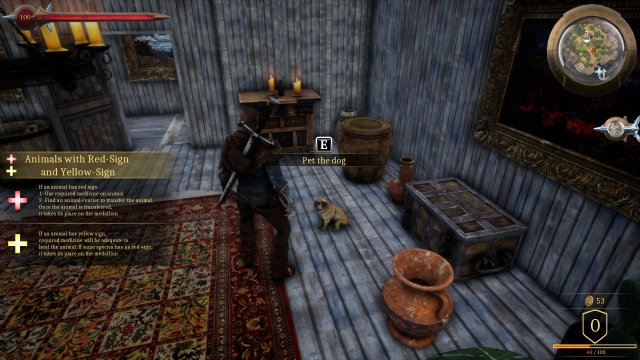 Yes, you can indeed pet the dog, and many of the other animals in the game.

From the outset, you can see The Witcher series’ influence in the game. It’s got that same open-world feel with locations that look strikingly similar to those in CD Projekt Red’s trilogy. The combat is not entirely dissimilar, although at the moment there are no stats or weapon upgrades etc. It’s very violent and frenetic and borders on the hard side at times, but it’s for the animals so it’s all worth it. There’s a herb collecting and medicine creation mechanic which makes up a large portion of the game right now, and these medicines are used to restore health to the sick animals, of which this game world has plenty.

There’s certainly still a lot to be added to Animal Rescuer, with most quests not functional at the moment and a bit of ropey collision detection still present. I found myself in the ground or hovering in mid-air more times than I would like. That said, the same applied to the first releases of The Witcher 3 so maybe Turquoise Revival is just really committed to emulating the experience of the game’s inspiration! All the cute animals are lovely, but there are a few odd graphical nuances at the moment.

There’s some lovely music in the game at the moment, but no voice acting yet. With quests not fully implemented that’s likely to not be a priority just yet. It’s a nice relaxing theme, and with the quaint village-like setting of many of the areas it fits very nicely. I’d expect to see more music added in the final release, but at the moment, with no quests to do and only sightseeing, a grand battle theme for example would sound out of place.

The full game is due for release on the 22nd of December, which doesn’t leave a lot of time to complete all that is needed in a game of this scope so it will be interesting to see if that date remains or gets pushed back. Either way, this is one to keep an eye on and I for one am very much looking forward to the game that bills itself as “The Witcher of puppies and kittens”