With the Left 4 Dead franchise, Valve has been nailed and riveted to a single mantra - if it ain’t broke, don’t fix it. Left 4 Dead 2 was released within a year of its predecessor, and since then Valve has essentially left the series alone outside of the occasional free map pack. Several titles have attempted to have the same longevity as Left 4 Dead, such as Earthfall, Vermintide and World War Z, all with varying and debatable degrees of success. Now, the pioneers of the genre itself, Turtle Rock Studios -the minds behind the first Left 4 Dead- has returned to the genre with Back 4 Blood, the spiritual successor to Left 4 Dead and a damn good one at that.

I was lucky enough to obtain a code to the closed Alpha that ran in mid-December of 2020, and after playing through the content with various groups of people, I can say with certainty that Back 4 Blood is definitely a title to keep an eye open for. The closed Alpha gave players free rein over four acts of a single campaign, named Evansburgh, that players run through back-to-back. Fighting through hordes of infected known as the ‘Ridden’, the team gets limited ‘continues’, or lives, based on the difficulty selected. If the whole team dies they lose one, and if all Continues are used, players are sent to the start of the first act, creating a greater feeling of loss when players fail. Back 4 Blood sported a memorable cast of characters in its alpha with a group of ‘Cleaners’ that are fighting through the Ridden-infested streets and buildings. It’s been said that the launch will see eight playable Cleaners, and the Closed Alpha introduced us to four of them: Holly, Evangelo, Hoffman, and Walker. It takes the character aspect of the four-player co-op shooter and spins this in a manner similar to how Vermintide does, by giving each character a distinct perk and starting weapon that lends itself to a particular playstyle. For example, Hoffman has perks that favour aggressive gunplay, with a chance to find ammo upon slain enemies and can hold additional grenades and medkits. My personal favourite was Holly, whose starting weapon of a baseball bat and stamina regeneration perks made her perfect for fast-paced, close-quarters action.

As well as character perks, there are also ‘cards’ which you select at the start of each act that can give you and your allies various buffs. You can build a deck of 15 cards and can choose one to always start with. The rest are presented to you in sets of three at the start of each act and you can choose one of them to add, which you keep for the remainder of that campaign. There is enough variety in the cards that you can really tailor a deck to a specific playstyle - the deck I first built was very melee oriented and paired nicely with Holly’s passive perks. The deck-building system can be a little daunting on first look, but it only takes a little experimentation to get the hang of it. The deck system is a well-implemented mechanic that allows for great replayability, as even when running the same deck, it’s unlikely you’ll finish two playthroughs with the exact same build. This works both ways though, as the infected also get cards at random with each Act that dictate the speed of the Ridden, and even the possibility of facing off a Boss. 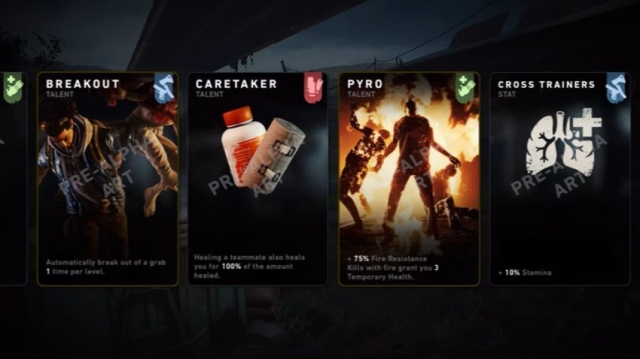 Throughout the campaign, players can collect credits, which can be cashed in at saferooms for equipment and ammo. The equipment can range from a top-up of healing items, to an ACOG sight on your assault rifle. Ammo in Back 4 Blood works a little differently, wherein you must find the ammo for your specific weapon: if all players are running around with shotguns and you’re only finding AR ammo, you’re going to find yourself in a bit of trouble quite quickly. Pick-ups are generally scarce throughout the levels, which is compensated for with the ability to purchase things and custom-tailor your build to more aggressive or supportive roles.

In the spirit of its predecessors, Back 4 Blood’s unending hordes are accompanied by more powerful ‘special infected’. The Hocker is a spider-like zombie that can cling to walls and spit webs at survivors, locking them defencelessly in place until an ally comes to their aid. Retches are the unholy love-child of L4D’s Spitters and Boomers, with a burning acid attack that has a chance to attract a horde. On top of this, they will shower the neighbouring countryside with their burning innards unless you take them down with a headshot. Bruisers are, as the name suggests, hard-hitting zombies that bear a striking visual resemblance to the Chargers. Their reach is deceptively large, so distance is advised when attacking them. We have Snitches, which are the by-product of a scrapped Left 4 Dead zombie called the Screamer. Snitches will wander the map aimlessly, screaming to alert a nearby horde if they aren’t taken out quickly enough. Much like Left 4 Dead, they work off an AI Director that will customise the intensity of the Ridden based on the player’s actions, making a unique experience for each playthrough. 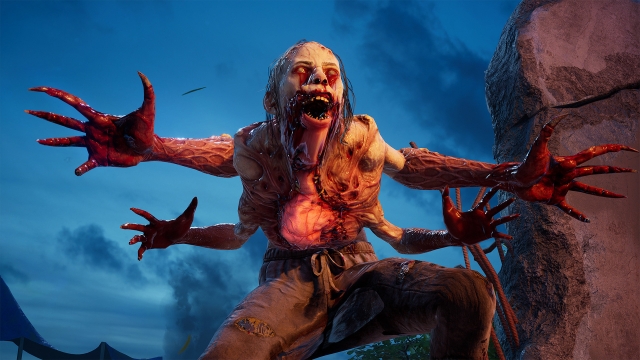 And finally, we have the Ogres. These huge bastards will burst out of the ground at fixed points on certain levels, or if you’re unlucky enough to have the infected pull the Ogre card, it will pop in unannounced during the level to turn your entire body into pavement lotion as early as before you second foot has passed the safe room door. These things have a lot of health, and in every circumstance where I went against one, we were forced to flee; the Ogre’s huge size and slow speed mean it can not follow survivors easily - even more so if they escape into an enclosed area. Turtle Rock’s work on Evolve was clearly an inspiration for the Ogre, from it’s hulking size to how it will flee and return later in the campaign for a rematch.

There was one major issue though - and if not for the fact that I wasn’t alone in this I wouldn’t even call it an issue. The game is incredibly difficult, way too difficult. Even on the easiest difficulty, this game is hard. Special infected will sometimes all arrive at once in pairs of two, which has brought a fully-healed team to death in a matter of seconds. Whilst perks can make them powerful, melee weapons are incredibly underwhelming when there’s more than a single target in front of you, which is all the time. It’s a necessary step away from the unstoppable deity that holding a melee weapon made you in Left 4 Dead 2, but it made melee weapons essentially useless and even with characters that are designed to use them (like Holly), I found myself eventually gravitating back to the pistol every time. I only completed the final mission twice through all my playthroughs (more times than some other people I spoke to), and both of those times was because one person playing Holly used her ‘stamina on kill’ passive paired with the Run & Gun card (allows you to hip-fire whilst sprinting) to just run straight to the end and not stop because no other character can keep up against the ungodly amount of Ridden that gets thrown at you, even when using secondaries like grenades and firecrackers. This difficulty is absolutely not helped by A.I. Teammates, which were plentiful because codes were given in sets of three, meaning almost all playthroughs had at least one A.I. - a decision I feel only can make sense if they wanted to see how well it performed. The friendly A.I. is like if you tried gluing two novelty tiny hands onto a Roomba and placed a typewriter in front of it expecting it to type you a personal apology as to why you found a crumb on the kitchen floor that it missed. They would rarely actually shoot anything, they would pick up important objective items and then do nothing with them, effectively soft-locking some levels. Multiple runs were destroyed on the final mission because I would place a minigun turret in front of an approaching horde and an A.I. would teleport onto it and then death stare the encroaching wave of death with the urgency of a pregnant cat idly trying to swat a fly after being given anesthetic. The difficulty would be slightly nullified with a full squad because if it’s a full team, it’s usually the fault of your own doings that cause a loss, but it seems the Alpha was designed to give players an A.I. companion that is hell-bent on sabotaging them, which sapped a lot of fun and motivation out of playing.

With all the ingredients in place, Back 4 Blood just needs to fine-tune the spices in order to be a perfect dish. As of writing, it is slated for a £49.99 price tag on launch alongside planned DLC, which I personally feel is an incredibly steep price until we learn more about what we’re going to get on launch day, especially when you take into account the last time Turtle Rock Studios did this, we ended up with Evolve. But based on my experience with the Alpha, Back 4 Blood is shaping up to be a great success if Turtle Rock Studios play their cards right. Make no mistake, the game is Left 4 Dead 3 in all but name, and if the game manages to improve upon the Alpha, it more than deserves the title.