The boomerang is one of the rarer weapons to appear in videogames and I’m not entirely sure why, because when it’s done right it can be a gratifying mechanic. The Legend of Zelda, RAGE and Gnar from League of Legends are all great examples of fun boomerang gameplay, but Boomerang X feels unusual comparatively because the boomerang doesn’t just come back to you, you can go to the boomerang as well.

Boomerang X is a first-person boomerang game where you go from arena to arena fighting waves of enemies using only your magical boomerang and immense speed. There are only three arenas available in the demo during the Steam Game Festival, but Boomerang X is already showing a lot of promise with its additive movement and unique visuals. 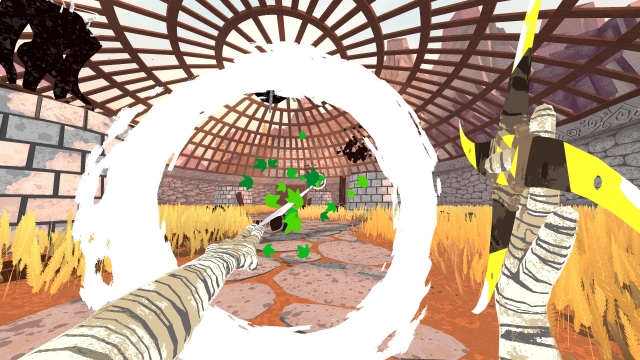 As soon as you begin, you get a quick tutorial teaching you how to use the boomerang with left-click as the throw (or hold to charge) and right-click as the recall, but as mentioned previously, you can also propel yourself to the boomerang by clicking the left-click again which is called Slingshot. This mechanic makes the game feel incredibly fast-paced since there is no cooldown or delay so you could zip around the entire arena with no consequences. You should be careful though because it is easy to lose track of where your boomerang is and Slingshotting to it at the wrong time may put you in harm’s way. There are shield icons in the corner of the screen to indicate your health, you start with one shield, but you get more as you proceed as well as refill spot at the centre of each arena if you do get hit.

Once you get to the first arena, you will be tasked with taking out waves of enemies within it to proceed forward, but strangely you don’t have to take them all out. Once a wave starts it will show multiple gold coins on the screen indicating how many you have to kill, but not all the enemies that spawn have gold coins above their heads and you only have to kill the ones that do to advance. It seems like an odd choice but it definitely helps to keep that fast-paced gameplay by making sure you’re zipping around to get in the best position so you can take out your targets without getting hit by other enemies. The three arenas available feel quite large whether it be vertically or horizontally. The second one is more vertical as you have to get up high with the Slingshot to get to enemies whereas the third is more of an open field and requires you to stay closer to the ground. 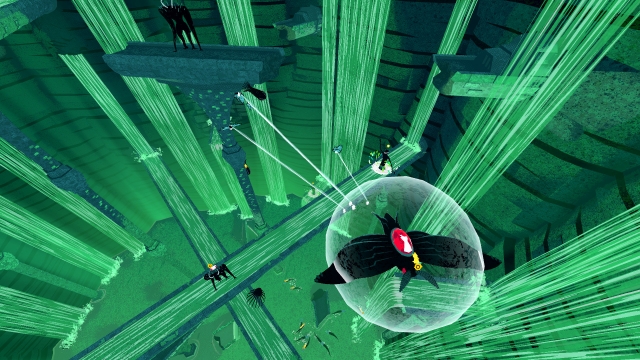 Finishing the first arena grants you the slow-mo ability which allows you to slow down time while charging your boomerang throw. Similar to the Slingshot, the slow-mo has no cooldown so you can use it continuously, but it has a timer for how long you can hold it. Slow-mo does help for some of the later enemies since it is required to take them out, but it also made it much easier to take out other targets swiftly because you have more time to aim.

Visually, Boomerang X has an awesome cel-shaded look to it that works well for the movement and momentum you’re constantly in when playing and the fast-paced Asian-inspired music also helps with that too. The enemy types don’t really look like much when moving at such speeds though, and since they are all essentially shadows, they kind of just blur into the world. 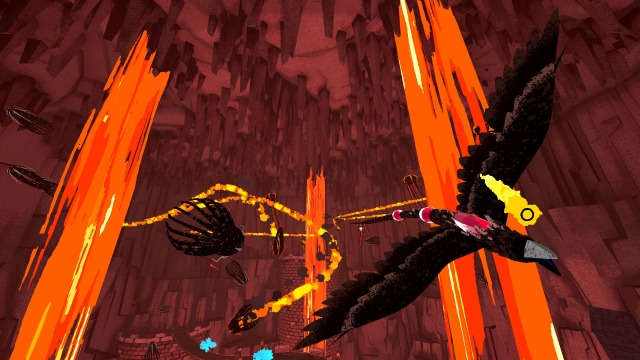 Overall, Boomerang X is a fun, fast-paced, first-person boomerang game that shows a lot of potential to be something great. Keep your eyes on this if you enjoyed games like Ghostrunner or Ape Out, it definitely provides that same high-speed moment to moment gameplay you’ll enjoy.

It was amazing & intersting to known about your website . And it was really helpful and informative.