BossConstructor is one of those games from the Kerbal Space Program school of thought: give a player a selection of spacey things and a rough idea of how a spaceship works and let them have at it. Not more than half an hour had passed before I had designed a mighty death-station bristling with missiles, lasers and high-powered engines.

The problem arose, however, when I clicked the “test” button. My creation, a mass of metal and badly-connected solarpanels, warped into a sector of space ready to wreak havoc. If havoc can be defined as “floating through space bumping into asteroids” then that is exactly what I caused.

Although BossConstructor gives you the option to design impossibly huge space-behemoths, there are caveats: you need to balance energy expenditure and generation, armour, turning speed, fuel and manoeuvrability. All of these are required to be finely tuned if you wish to get more than a few sectors into the game’s expansive exploration mode.

Once you’ve created a USS Enterprise, Serenity or Millennium Falcon of your own, you can test it out by journeying out into BossConstructor's swirling galaxy of stars. Divided into explorable sectors much like FTL: Faster than Light, each is filled with enemies, pick-ups and secrets and accompanied by a soothing synth-powered soundtrack. The top-down 2D combat is fluid and intuitive, and the inertia of firing high-powered weapons in space is well represented. There are a great variety of spaceships to encounter too, each sprite rendered in an endearingly simple graphical style.

As you proceed through the sectors you get the option of evolving your craft into a bigger and meaner version of itself, mainly through using the parts from your defeated enemies. What role you choose – economic, offensive, defensive or speed – can be tailored with an array of customisable modules and parts. Want a ship that can outrun bigger foes and lay mines behind it? Place a few extra boosters and slim down the armour. Not sure if your ship could do with more solar panels or engines? A helpful window will keep track and inform you of the possible speed, weight and energy needs of your craft. 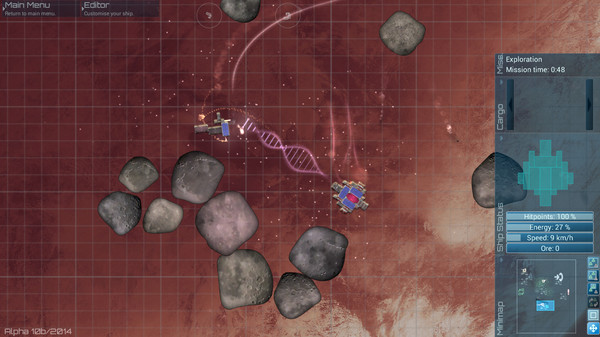 Other modes the game offers include an AI playground which enables you to simulate a space battle between two computer-controlled sides or, perhaps more interestingly, run a simulation on a created ship. The simulation runs through every possible choice the craft could make when playing the main game - including enemies it could fight and loot it could pick up - and presents you with the best results to give you an idea of how well you’ll fare.

At the time of writing the game is still in very early stages – the story mode and missions sections are works in progress – yet BossConstructor is already looking like an effective scratch for that space-faring itch. All the tools are there for budding captains to design their very own mega-ship and explore the stars.