The first thing that’ll strike you with Cartel Tycoon, if, like me, you’re a relative newcomer to the genre, is the lack of tutorials. You won’t so much be guided through the ins and outs of the drug trade business as much as you’ll be thrown into it and left to figure things out with little more than some quest objectives to show you the way to success. Who knows? This could be a symptom of the game’s pre-release status, or maybe it’s a true representation of starting out in the drug trade; I certainly never hope either of us find out if it’s the latter. Whatever the case, it took me an embarrassing amount of confused clicking, dragging and menu-reading before I quite got the hang of things. Still, get the hang of them I did, and once I was up and running, the cash started flowing in. 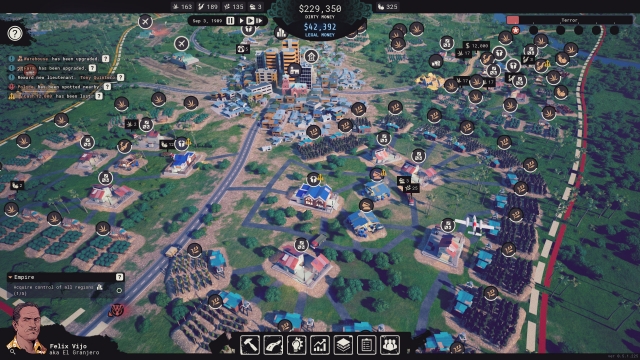 So, what is there to drug trading? It can’t be that complicated, can it? Make drugs, sell drugs and make more drugs, right? If that’s your belief (like it was mine) you’d be wrong. Making the intoxicants themselves is just the first link in the cartel chain. You’ll need ways to transport your supply (building roads if necessary), somewhere to store it, ways to smuggle it across borders and even legitimate business with which to launder the dirty money through. Running a large-scale drug operation is an elaborate thing, filled with variables and schemes that can go wrong at any moment. Let your storage warehouses fill up with drugs, for example, and it might attract the attention of the cops—the eternal enemy of any organised crime operation—who are bound to go sniffing around your business, looking to shut you down or, if you’re lucky, merely demand a bribe in return for their silence. 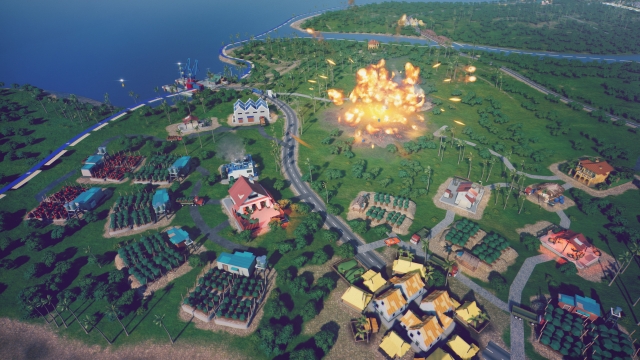 While you start off producing and selling opium, you will eventually set your sights on more profitable ventures: marijuana, cocaine, methamphetamine and even—wait for it—vegetables. Don’t look so surprised: you’ve got to keep the suspicion down somehow! While you’ll be eager to dive straight down the most lucrative path possible, there are other factors to consider. Opium may not net you much profit, but once it’s produced, it can be sent straight to the suppliers and sold. Other drugs require a lot more legwork before they’re market-ready. Cocaine, for example, needs transporting from the farm to a drying rack facility and then a chemical plant, all before going to a specialised lab and finally being put on the market. That’s a lot of work, and while it’ll line your pockets far quicker than with opium, you’ve got to have the infrastructure, lieutenants and cash to back it up. 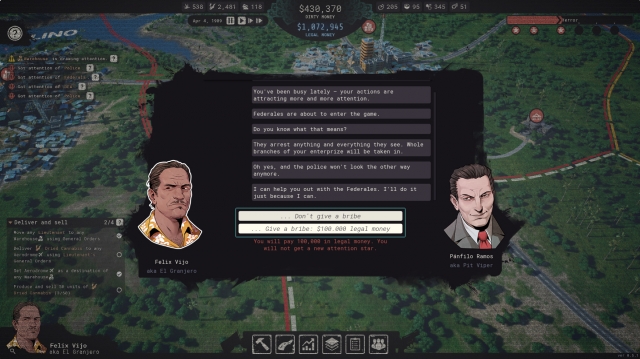 Now, when I mention Lieutenants, I don’t mean it in the literal military definition of the term. In Cartel Tycoon, Lieutenants are essentially cartel members who act as your ‘movers and shakers’. They’ll transport goods, watch over your occupied territories, take down individuals who are causing you trouble (yes, there are power struggle mechanics in play between the gangs which occupy this fictional nation) and more. On top of that, lieutenants are the characters who will take over the protagonist role should the worst come to pass and your Capo (the boss, your player character) bite the dust. This gives Cartel Tycoon an interesting roguelike aspect, as failure is not a true end, but merely a chance to start semi-fresh and pick up the pieces of your cartel empire as a lieutenant bestowed with all-new power.

There’s a lot to like so far about Cartel Tycoon, even in its distinctly pre-release state. In fact, an instance where the game essentially told me “we’re going to put some dramatic dialogue here in the full release” during dialogue exchange actually made me crack a little laugh. So many of the pieces are in place for a top-notch title; with a more focused tutorial, I can see Cartel Tycoon being a game that appeals to both fans of the business sim genre and newbies alike.