In Flotsam, a survival city-building game developed by Pajama Llama Games, you begin with a city center marooned in the middle of a garbage-strewn (but still beautiful) ocean. Schools of fish congregate nearby, just waiting for your fishing boats to go nab them, and whales drift beneath the surface of the waves. Your villagers, or drifters, have basic needs such as sleep, thirst, and hunger. The whimsical, cel-shaded graphics, the folksy music, and the generally low stakes create a relaxing atmosphere that lulls you in as you watch your town develop.

The gameplay is equally simple. You set buoys to tell your drifters to go gather plastic, flotsam, fish, or to explore points of interest like a shipwreck on an island. There are a few buildings to choose from at the moment: moorings, beds, workshops, and water distillers are some examples. Your floating city sails between different locations that each have explorable points of interest, but after setting your buoys and making your build orders, you mostly sit back and watch your drifters—and a seagull, if you can find one—go about their business. By the time I unlocked all of the buildings via research, which took about three hours, I had a self-sustained economy that needed little input or management. 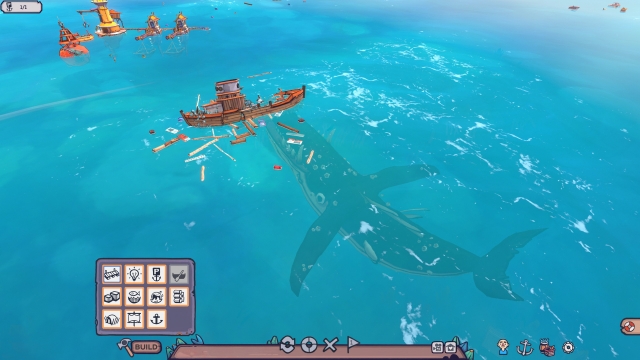 According to their development roadmap, Pajama Llama Games are intending to add several new features, such as weather, a day/night cycle, schedules, and a priority system. The developer’s FAQ states, ”On your journey you will encounter dangerous sea animals, visitors with unknown intentions and mysterious ruins and wreckages.” Hostile fauna and extrinsic threats always make survival games more interesting and dynamic, but I would also like to see specialized drifters, such as scientists who go scuba diving in coral reefs or scavengers who explore derelict vessels.

Flotsam is still in Early Access, and I enjoyed the time I spent with it. I’m confident with the developer’s simplistic formula for the game, because it has worked before in other titles like Islanders or FTL, but time will tell if the developers add the appropriate features that allow the game to retain its simplicity while also giving the player a reason to keep coming back to their little town on the waves.