At EGLX in Toronto, Canada, I got to try a bunch of cool new indie games coming from Canadian developers including a game called Foregone from Big Blue Bubble. Foregone will look similar to anyone who has played Motion Twin’s Dead Cells and if you liked that game, you’ll probably like Foregone as well.

Foregone is a combat-focused action-platformer, and while talking to the developers, they told me that this game was definitely inspired by the style Dead Cells popularized, but it’s more of a linear, story-driven experience. Hearing that alone has piqued my interest significantly because while I loved the Dead Cells gameplay, having no real story gave me little motivation to beat it (which I didn’t). They continued saying that their vision is to combine the challenging gameplay elements from the Dark Souls and Diablo series into this visual style, and from the demo I played, I think they’re on the right track. 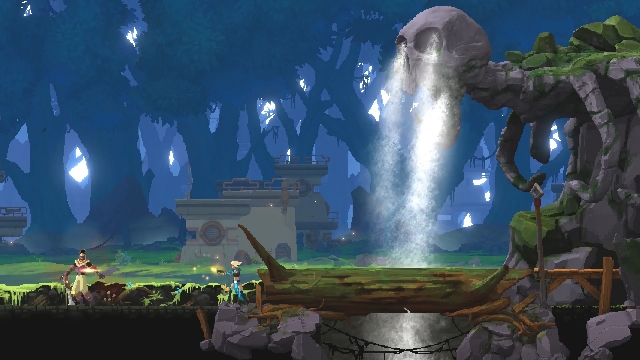 Since the demo I played didn’t really give me any real story elements, this preview will be mainly talking about gameplay which I thought was great. As soon as I picked up the controller and moved around, I felt that Dead Cells inspiration and I already had a good sense of how this game was going to play in terms of combat. Everything felt super smooth and looked great – maybe even better than Dead Cells – especially when speaking on the animations.

While Foregone’s combat feels similar to Dead Cells, it’s more elaborate with skills and various weapons to choose from. I started out with a sword of some kind and a gun for my ranged weapon, but as soon as I began to eliminate my foes, they started to drop different weapons. In the demo, I got only a handful of options for weapons including a couple of swords for melee and a bow for ranged, but the developers said there were will be a ton more once the game is out. They also told me that because this isn’t a roguelite, you won’t lose weapons when you die and you will have the chance to take weapons you like back to the main hub area and upgrade them. Death will cause you to lose other things like experience, but you can go back to retrieve it similar to Dark Souls. The thing that made Foregone feel unique to Dead Cells were the skills. There are four skills in total: two offensives located on each trigger and two defensives on each bumper (I played with an Xbox One controller on PC). The right trigger was a dash that allowed me to go right through anyone in range doing some significant damage and the left trigger was a powerful area of effect attack that did damage to anyone in the room. For the defence, there was a healing command on the right bumper and the left bumper granted a shield for those tough situations. These abilities were set to recharge based on the number of enemies I engage. I initially kept forgetting about the skills until I realized that they are pretty crucial to success in this game.

Towards the end, they teased me with this incredible-looking bird-like boss that ended the demo as soon as I got to it, but it really showed how amazing the animations are in this game. As someone who never finished Dead Cells because of the difficulty but loved the gameplay, I’m excited to play a game that feels similar enough to get me intrigued with a linear story and more robust gameplay mechanics to make me stick around for more.
Forgone from Big Blue Bubble will be entering Early Access on Steam in Winter 2019 with consoles coming at a later date.