Forever Skies is a first-person survival game in which your goal is to explore the wasteland in your high-tech airship, hunt for a viral pathogen to cure a mysterious illness, and — of course — survive the treacherous lands.

Although I'm a huge fan of the survival genre — especially when paired up with a post-apocalyptic setting — and have played many of them, I've never felt so distraught and uncomfortable with Earth's condition; there's nothing recognisable about it except its given name. And the feeling of emptiness and destruction was only enhanced by the developer, as they did a fantastic job at capitalising on the post-apocalyptic feeling through the audio design. It's hard not to feel the heaviness of the situation where all you hear is the sound of machinery and unnaturally strong wind. It truly is an eerie arrangement. 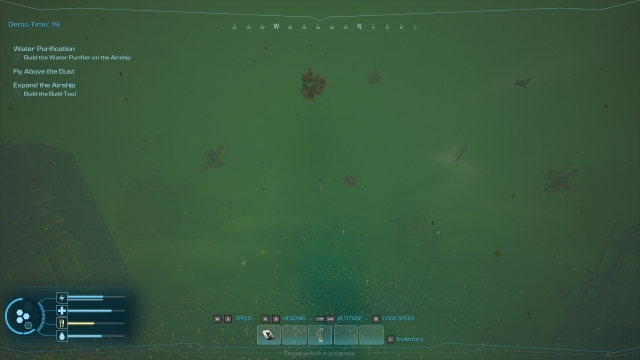 As for how Earth got to this point, the only way you find out (at least in the preview) is through notes scattered around the world, much like in Fallout 4. From what I could gather from them, humanity's downfall was caused by a virus. Although I got hints of there being more to it than that, I really couldn't say because it was quite vague. Regardless, I like how they used the cause of the apocalypse as a core game mechanic, as you have to keep yourself healthy lest you want to become vulnerable to infection.

Unfortunately, because the demo was timed, I didn't have much exposure to that particular mechanic. I did get sick with a virus after eating fruit out of desperation (stupidly, too; I guess I learned nothing from Fallout 4's radiation), but I accidentally cured myself soon after. Due to that, I don't know how much of a nuisance it will be to get ill, but I look forward to it, as I feel it played quite nicely with the game's setting. 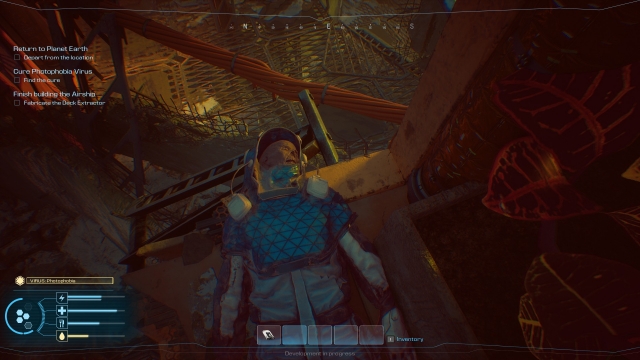 As for the other needs, I found that keeping myself hydrated was surprisingly intuitive and immersive to the setting. I loved that I had to wait until it rained to collect dirty water and purify it or build a machine to collect it throughout time. Food was a bit more complex, as I had to set up a whole machine to catch bugs, get water, cook the meal, and then I could eat. Not to mention that the lure will go to waste if you leave the hook unattended for too long, and it will only last you for about two to three catches before you have to make another one. Whilst this sounds a bit annoying, it wasn't too much of a bother, especially because I can only imagine there will be progression in cooking too; I doubt we'll be eating boiled bugs for long!

During the demo, I was also able to use the build tool and fly the ship to a nearby location. Although the new area wasn't vast, and the demo ran out soon after, I was able to get a feel for what the exploration might be like, and I quite liked it. I scavenged some food, water, and resources, which gave me a nice boost in productivity and allowed me to upgrade my small ship by adding an extra room. Whilst I didn't get to play for much longer, what I got to experience of the pacing and progression, I very much liked. The gameplay loop felt rewarding, especially since there was no hand-holding, and I mostly had to figure things out myself. With no hints and barely any tutorials, it really did feel like a challenge to survive on this wasted Earth. 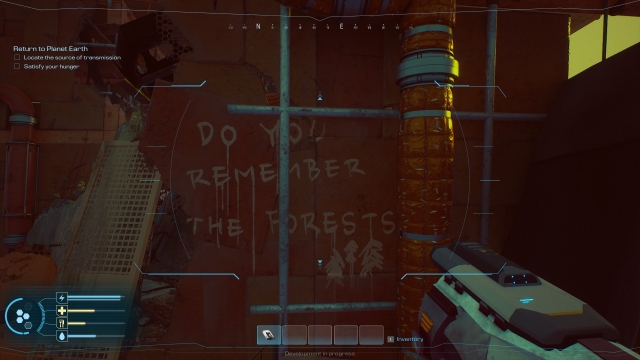 It feels like Forever Skies is headed in a good direction. The gameplay was satisfying and challenging, the graphics were fantastic, and the sound design was captivating. If you'd like to give it a go for yourself, the demo is available for download on their Steam page. I strongly recommend any fan of the genre give it a shot.