Just over a year and a half after its Early Access release date, Hell Let Loose - a tactical FPS based in World War II - has come a long way in its community-centred development. In Hell Let Loose, you play as a soldier on either the German or American side of the conflict fighting through reimagined battlefields on the Western Front. With a focus on historical accuracy and tactical immersion, the developers at Black Matter have worked long and hard with their devoted player base to craft a brutal and exciting experience.

As both a huge history nerd and a big fan of squad-based shooters like Battlefield, Hell Let Loose caught my eye with the sheer scale of the matches. Dropping into a 100-person lobby with infantry, tanks, and air support honestly made my friends and I feel like we were on the front lines ourselves. In an infantry unit, you can choose one of nine classes; options include Rifleman, Officer, Machine Gunner, Automatic Rifleman, Medic, Assault, Support, Anti-Tank, and Engineer. Each class has its own set of special abilities/equipment to offer the squad and ultimately the team. If you want to play in a smaller unit of two people, you can opt to play in a Recon unit. This unit is reserved for those that want to play off-angles away from the main forces, with the two classes available being the Sniper and the Spotter. If vehicle warfare is more your style, Hell Let Loose allows players to create a 3-man Armor (Tank) unit, with one Tank Commander and two Crewmen. For the most advanced players, you can take on the role of the Commander. The moment-to-moment gameplay is very different for the Commander, turning into more of a Real-Time-Strategy game. The Commander is in control of supply drops, tank spawns, and artillery/smoke placement. The Commander typically plays far enough away from the front line to focus solely on the positioning of air support and how each unit is faring. This is accomplished via a line of voice communication that is exclusive to leaders of infantry units, tank units (Officers/Tank Commanders), and the Commander. This ensures that the whole team is working together towards their common goal. The chain of communication typically goes as follows: The Commander relays orders to specific units (e.g. "head North and establish a position at the church"), the unit leaders coordinate to accomplish their goal and utilise the general proximity chat when necessary.

The game currently has a nine-map roster, including legendary Western offenses like Normandy Beach (Utah and Omaha), Carentan, and Foy. Each map is unique and is imbued with its own challenges and terrain, ranging from wide-open fields, city streets, and wooded areas with a lot of verticality. The map design is extremely detailed, and the traversal of the terrain is relatively smooth, with some minor exceptions here and there. Their development roadmap has mentioned Eastern Front maps in the future, but no definitive date has been set. Going over the development history I've seen remarkable consistency with game improvements and updates, which is uncommon among Early Access titles (take DayZ for example). This bodes well for the future of the game, as the development momentum shows no real signs of stopping. 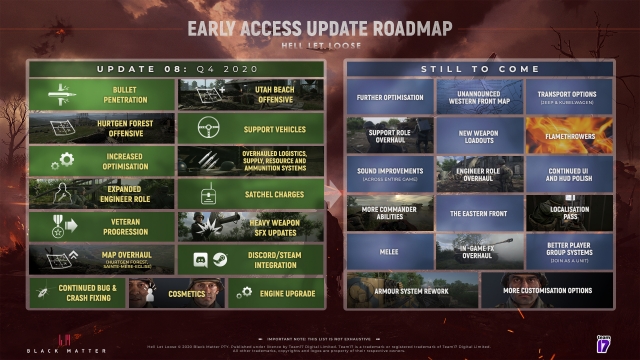 Here's a look at their most recent Development Roadmap

Although this game is still a long way from where Black Matter wants the game to be, my personal experience with the game has been very positive. After being burnt out on the modern FPS run-and-gun formula for a better half of this year, Hell Let Loose offered a unique experience with a steep but manageable learning curve. The servers are well-populated, with many community-run servers at max capacity most hours of the day. It can be difficult to get into the same server as your friends, since the most popular servers are the best to play in, but have a queue to join. However, once you're all in it's an absolute blast. When this game works, it's fantastic. That is, when your unit leaders are communicating with other units, your unit members are supporting each other and your other teammates and the commander knows what they're doing, the game experience is at its best. Most times, the experienced players are very constructive and are willing to help newer players understand the ins and outs of the game. When in doubt, just stick to your squad leader and you'll likely be fine.

Given all of this, should you pick the game up? If you're a fan of realistic FPS combat or want to get yourself out of a lockdown-related gaming rut, then I'd say Hell Let Loose is a great title to add to your roster. If you're on the fence, then luckily the game goes on sale often. If you do end up picking the game, then think about joining one of the Hell Let Loose community Discord servers and finding a group to play with. The gameplay experience improves significantly with a group of players that are keen on working together to win. The Hell Let Loose community is very active and the developers often meet with community leaders for feedback. Hell Let Loose is a safe bet in its current state and is looking better and better with each content update.

Indie game phenom, rogue-like connoisseur, and tired of being told to become a Doctor.