As someone who has put in an embarrassing amount of time into House Flipper, the concept of House Builder really excited me. I could build my own house and then kit it out, adding an extra layer of creative freedom that similar titles were missing. Perfect.

The Steam Next Fest preview only gave me access to two levels, an Igloo and a Jungle Hut, so I didn’t get to actually sample the more conventional house-building that seems to be what most of the other planned levels will be.

Starting with the Igloo level, I was immediately greeted with a nice little fire, and a cute canine companion standing beside it. I did what any self-respecting gamer would do and crouched next to it, pressing all of the interaction buttons I could see on the help page, but alas, I was unable to pet the dog. Whilst expressing my minor frustration, I did however discover that I could stand on top of it. 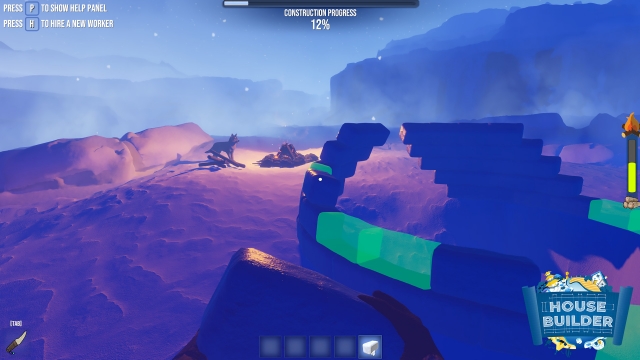 Come out to Greenland, we'll build an igloo, have a few laughs...

Whilst carving cubes of ice with my knife, I noticed the bar on the side of my screen that measured how much strength the fire had, and how close to freezing I was. The purpose of the dog was soon revealed when the fire started dying out. Frost effects slowly grew across my screen, obscuring my vision, and the dog began to frantically bark to get my attention. As I rushed back to the fire to toss a few more (constantly respawning) logs onto the fire, I heard the bark a bit more clearly. I’m not sure if I was mishearing an audio queue of some sort, or if the sound effect was sourced awkwardly, but there was the faint hint of a synthesised voice among the barks, saying something like “come here, Jim”, which was definitely a bit jarring.

The Igloo experience probably wasn’t the best choice for an opening level of the demo. The ice cutting task was monotonous, the shallow survival mechanic felt more like a hindrance, and the actual building was just placing your cut pieces in a set pattern of glowing guideline blocks.

The second mission available was the Jungle Hut, which introduced a Spidey-sense sort of ability to help you find the increased variety of resources required to build this time round. I started with collecting rocks to place a foundation, followed by chopping down some thin trees to use for a frame. The main part of the building involved mixing water from the nearby stream with mud in a trough to make mud balls. These mud balls were then placed into a frame to create bricks to layer the walls of the hut.

The mud balls were awkward to handle. Creating too many at once would cause them to clip into each other, launching them out of the trough, and the ones that fell onto the floor refused to be interacted with. Similar to the Igloo level, the resource collecting process, even with the several upgrades available, takes a bit too long, with the game seemingly favouring a repetitive task to extend the play time. 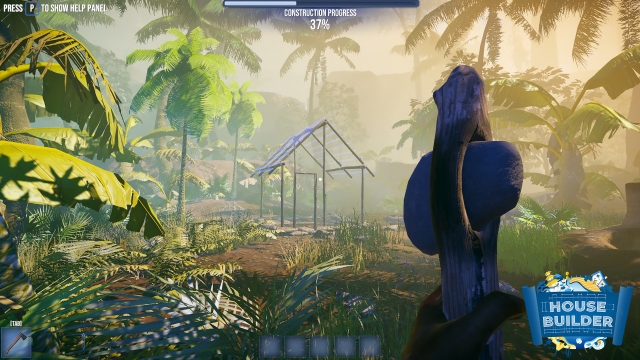 Not pictured: about 14 other Jungle Level™ cliches

However, the game does reward exploration, as I found a little idol statue in the jungle that awarded some bonus points, and further interactivity with the different game environments could be a very promising aspect of the full game.

I was left feeling a little disappointed with this taste of House Builder. I was hoping for more control and creativity in the building process, but it’s more of the same formula present in the ever-growing list of obscure first-person-simulators: find the resource, collect the resource, click on designated areas to place the resource.

This could be a great time for anyone who really enjoys games with a focus on collecting resources, but if you were expecting some freedom when building houses, maybe stick to The Sims.

House Builder - Build all over the world!