Marvel Games has been pumping out games since it decided to let other developers handle its IP rather than create in-house and, so far, it has been very successful. Marvel’s Spider-Man from Insomniac Games is one of the best-selling PlayStation 4 games of all time, Marvel Ultimate Alliance 3 sold more than predicted and the hype for Crystal Dynamics’ Marvel’s Avengers is through the roof, but there is something else coming before we get that. During one of PlayStation’s State of Play streams, it announced Marvel’s Iron Man VR exclusively for PlayStation VR (PSVR) and I got to get my hands on it.

The Marvel’s Iron Man VR demo began with an awesome animation of the UI for the inside of Iron Man’s suit booting up as you see Tony Stark’s breath fogging it up. Once everything it is ready to go, you’re taught how to hover (by holding your hands to the side) and fly forward (by moving your hands towards your back) all while holding the triggers for the thrusters.

As you fly forward towards Tony Stark’s house you get all the logos for the publishers and the developer – Camouflaj – along with the logo for the game, and as you reach the house, Pepper Potts begins to speak to you. I thought Tony’s voice and acting so far were great, but I noticed Pepper Potts wasn’t as good. She didn’t have that same energy as Tony and the dialogue felt more robotic as well, but it’s still being worked on so let’s hope that changes. 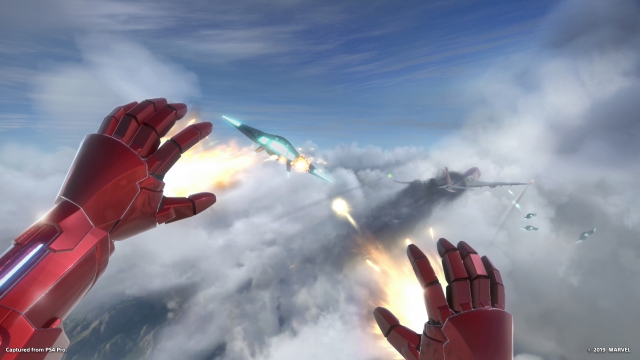 Once they finish talking, she brings up some calibration tests to make sure his suit is working correctly with the first being target practice with my hand blasters. Targets started to appear all around me and I had to use the PlayStation Move button to charge up and fire my hand blasters, pointing my hands towards the targets. There is an auto-target feature that can help you as well, but it's more helpful when you’re flying around, which I’ll speak more on later.

After the target practice, it was flight training and this is where it got a little tricky. I had to fly through a bunch of indicators, similar to a time trial or checkpoint race, but because I had to physically move my head/body to look around me, I was constantly spinning around in circles since I didn’t want to get tangled in the wires. This continued to be a problem for the remainder of the demo and I’m not sure it’s a problem that could be solved unless the headset is wireless.

Flying itself is impressive though and having the player actually use the thrusters to move around as Iron Man would made it incredibly immersive. To go down I would have to aim the thrusters above my head, to go backwards I would aim them towards me and so on, and to me, it felt very natural and realistic if you know how thrusters are used, but this wasn’t the case for everyone. I witnessed many people confused out of their minds on how to go down or just simply hover and honestly, it was quite funny to watch. While also doing the flight training, towards the end you learn how to punch which is holding one of the face buttons and performing a punching motion. This was kind of weird since it felt so out of place and gimmicky, but maybe their thought process was adding in another mechanic for combat so it wasn’t just using the blasters.

After the flying tutorial, I got to finally use these newly learned abilities in combat against combat droids and you can bet that I got tangled up in those PSVR wires, but it was still awesome regardless. I literally just pictured Iron Man in the movies, thought about his movements, and played the game as such and it worked out really well. Since the hand blasters have a very well-tuned auto-target feature, it made it much easier to hit things in flight. I was using one hand to hover as I blasted droids with the other, I was flying around to get to optimal positions for better aiming and I was even using the punching. I was essentially Iron Man and it felt great. Then the demo ends with Pepper telling to come home and I landed my suit in my house and the VR headset came off.

Marvel’s Iron Man VR surprised me, mainly because I wasn’t expecting what we’re getting. I was expecting a VR on-rails Iron Man shooter, but this is so much more. The goal of this game is to make you Iron Man and I think it does that with great success, despite the gimmicky punching and robotic Pepper Potts. I very much enjoyed my time with Marvel’s Iron Man VR, but I think it requires a wireless VR headset to be truly enjoyable, and since it’s a PSVR exclusive and they don’t have one as of yet, that’s a problem that cannot be fixed.

Iron Man VR Has Been Pushed Back to May