You don’t have to be homeless, penniless and have no possessions save your smartphone to drive a metro train - but it helps! By which I mean this is the situation we find our protagonist in upon starting Metro Sim Hustle. It’s a survival simulator from Departure Interactive, set in what appears to be the “near future”.

Now, when you hear the words “survival simulator”, you don’t immediately think that it will involve doing a job well and chatting to people now and then. No, you might think of desolate wastelands, scavenging and crafting. Well, there’s no wasteland and there’s no crafting. Also, since the title has “metro sim” in it, you would be forgiven for thinking that this is a train driving simulator. Well, it is, but it’s complicated.

As I said, you start the game to find yourself with a phone and one simple mission - go to work. When you leave the abandoned building in which you’re squatting, you’re thrust into the city. There’s an arcade, a nightclub, a pizza delivery place, a corner store and an apartment building - which you’ll need money to start renting a place in. Oh, and a sushi bar

There are a handful of NPCs scattered around each of those locations, and a couple who wander the streets. Since talking to people and getting them things (the titular hustle) helps you maintain your sanity bar, it would be nice to have more than are currently available. However, more are definitely coming in future updates, as a few of them mention the fact that access to the upper floor of the club is being fixed.

Now, back to the day job, where you’ll be earning most of your money in Metro Sim Hustle. You have three routes that you can drive, each of a different length and with different pay rates. Each one is unlocked with enough experience, and it’s kind of a grind, but that adds to the realism. You control the speed, the brakes, the doors and fire suppression system. There’s also the horn, lights and fan, but you don’t really need to worry about those. 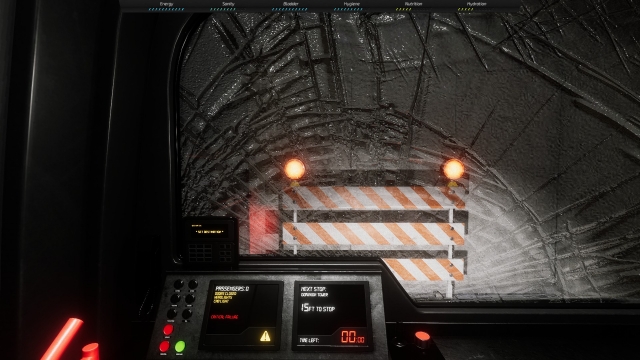 You DO have to worry about stopping

Each route has a speed limit, and there are boxes which will penalise you if you’re breaking the speed limit. Why would you break the speed limit? Because you get a bonus for being prompt, and a timer counts down between stops. So long as the doors are open (only possible if the parking brake is on and you’re in the stop zone) before the timer reaches zero, you get a little bonus. You also get a bonus for setting the next stop on the little readout that you have, but I’m still not entirely sure how that works. Whilst driving your train there are dangers to look out for - mainly terrorists and people on the track - both of which will affect your income if you’re not careful.

Outside of work, you can visit the arcade to play some games. Not videogames, but actual machines that give you tickets depending on how you do. These can be redeemed for food, drink and glow sticks. Those aren’t the only games, however, as you can find a blackjack table in the rear room of the nightclub, as well as alcohol at the bar and a topless dancer. 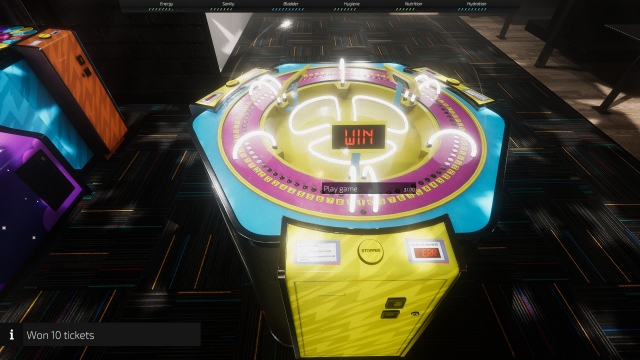 No, I'm not taking a screenshot of the topless dancer

As I mentioned, you can interact with the NPCs. There are a bunch of chat options, but they each only react to certain things. You can usually buy and sell things with them, and since most of them talk about drugs I wound up buying them from one person and selling them to others. You can take them yourself, which restores your sanity, but I didn’t try that out.

Currently, Metro Sim Hustle is quite bare bones. There are a few places to rent but once you have the best apartment, the only thing left to do is earn money by driving the train. Whereas an actual train simulator has the locations and stuff going for it, the underground hardly makes for interesting backdrops.

The controls are also a bit of a challenge to get used to, as I had to keep defaulting to the mouse and buttons on the train console, rather than hitting the correct keyboard shortcuts. And speaking of challenges, getting between stations is doable but very tight.

Departure Interactive has work to do, but this is a promising start. Metro Sim Hustle has more slices of realism than I had expected, and I’m definitely going to keep an eye on it as it goes through Early Access.