Adapting and recycling 16th century Chinese novel Journey to the West is as routine as ever in Chinese media, though it’s also been an influence outside of China. Most notably the Dragon Ball franchise but also in videogames like Ninja Theory’s Enslaved and also Unruly Heroes released earlier this year.

To explain its strange title, Monkey King: Hero is Back is actually an adaptation of the computer-animated Chinese film of the same name, which in 2015 went on to become the highest grossing animated film of all time in China, so it’s certainly picked up plenty of buzz to young audiences in the Chinese market.

For the rest of us who haven’t heard of it, well, you might take a look at it and see a fairly average-looking cartoony action-adventure game from the PS2 era. And in many ways, that’s pretty much how Hero is Back plays.

Following the film’s story, you play as the Monkey King, Sun Wukong, who’s been freed after 500 years of imprisonment, so he’s not looking particularly king or warrior-like. In this demo, I’m trying to infiltrate a village that’s been overtaken by monsters, so it’s up to me to flush them out. 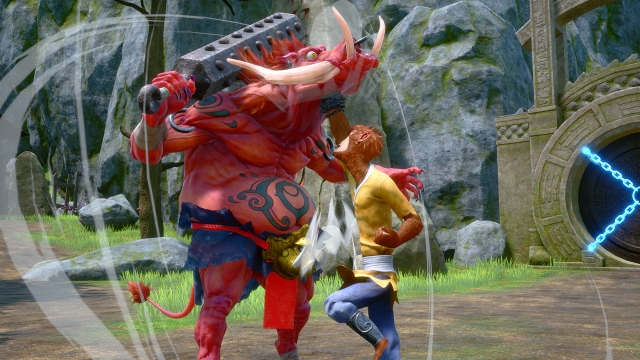 It’s a pretty old-fashioned melee-based action game as you smack and kick around some reptilian grunts straggling about. You can actually approach combat situations stealthily and take out enemies with one blow that way, but crouching to do this felt too slow and being impatient, I just wanted to get into the thick of the action, unleashing my monkey’s kung fu.

It’s standard scrappy brawling then, where you can mash buttons to pull off basic combos or perform a more powerful attack that takes a bit of time to wind-up, while you can also expect QTE-based counters. But it wouldn’t be a brawler without being able to use the environment, so there’s also pots you can pick up to hurl at enemies or you can grab a bench to do some more smashing combos, while being treated to the occasional close-up and freeze-frame to accentuate the slapstick impact.

You’ve also got a magic meter that can be used for unleashing some more powerful attacks, though these aren’t really for spamming as the gauge runs out pretty easily. However, enemies also drop materials, and you’ll be able to use these to craft potions to replenish both health and magic at certain checkpoints.

Strangely, Monkey doesn’t feel particularly acrobatic outside of combat. Besides what seems to be the lack of a run button, there’s a general clunkiness to movement, noticeable in stealth mode as well as in platforming where I missed a few jumps across the village rooftops then had to climb back up all over again. Incidentally, when climbing up ladders or going inside, these are also broken into different areas via short loading. 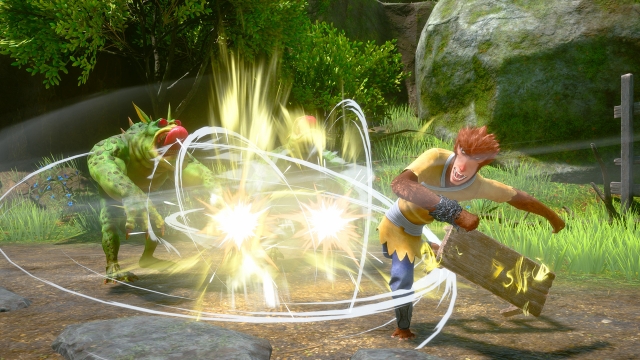 The combat didn’t present much of a challenge, although the demo ended with a boss fight with a large club-wielding boar, who also summons his lizard lackeys after you. Nonetheless, it’s got that easy pick-up-and-play feel that should make it feel right at home for kids.

Speaking of kids, you’ll also notice that a lot of the time you’re being followed by a little boy who’s also carrying his little sister with him in a basket on his back, which is rather adorable. From the film, he’s a key character that the Monkey King bonds with over the course of the story, though it’s hard to tell if he has much of a function in the game other than being an annoying voice yelling ‘Monsteeeer!’ whenever the enemy’s alerted to you (cheers, kid). At least from this demo, I forgot about his presence once a fight happens so it doesn’t seem like you need to protect him from the monsters nor does he offer any assistance.

The animated film Hero is Back may have been a huge hit in its native China, and as part of the initiative for more Chinese developers to bring their games to the West, it’s a nice start. Hopefully the final game does showcase a bit more of the Eastern aesthetic and mythological side because aside from a few flashes of cartoon slapstick kung fu, as it feels a bit of a generic throwback.

Monkey King: Hero is Back Available for Pre-order

Monkey King: Hero is Back