Not for Broadcast Preview

I’ve always thought that being a TV producer would be quite fun. Aside from the fact that I like to create things to entertain people (or at least try to), it would also mean getting to hear what the newsreaders say when the ads are on. Turns out, I’m not the only one, as that’s one of the things you get to do in developer NotGames’ debut title Not for Broadcast. Indeed this is one of the most engaging parts of the game, with the reaction of the newsreaders to the unveiling of what is essentially a new world order is fascinating to watch.

It’s a largely FMV-based game as you might expect, and you’re charged with the control of camera angles, selection of advertising, and avoiding interference via the means of a steady hand game. It’s not a hugely challenging game overall; in my time playing I never actually failed any levels, but there were a few where I got a low score. You’re granted a scorecard with a grade on it at the end of each level, which seems to be one way of adding replay value to the game. At the moment, that replay value is much needed, with just three of a planned ten chapters included. You can play through this title in around two to three hours at the moment, although there is plenty of extra content that makes extra playthroughs worthwhile. Selecting images to represent news stories can affect the public perception of people and events for example, meaning that later stories about those same events and people can be vastly different.

Once you’ve created your news programme, you can rewatch it. If you want to see how it looks as a finished piece of work then you can just watch it through as if you were a viewer, but it’s the aforementioned behind the scenes type snippets that are the real meat and bones here.

The basic premise of the story is that a new extremist government is elected on a premise of wealth and equality for all. But as the days since the election pass, the policies get more extreme, resulting in people questioning if the seemingly well-meaning government are actually as altruistic as they make out. 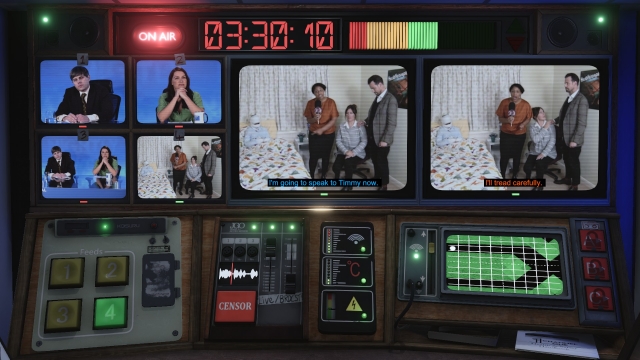 As well as the serious news stories, there are a number of light hearted sections. A bizarre sports section with a game featuring incomprehensible rules and a musical performed by school students that plays out just as cringely as you would expect are in the game so far, but it’s fair to expect more of this kind of thing when the game is fully complete.

Between the sections, multiple-choice interludes telling your character’s personal story of tension between a mixed-class family plays out. I didn’t notice any major differences from these choices and I’m not sure at the moment how necessary they are, but they gave a small change of pace if nothing else. At the moment, with only a small amount of content, Not for Broadcast is a brief but satisfying affair. It feels like something that may well have come from the classic era of FMV games on systems like the CD-i and 3DO, so it might not be to everyone’s taste, but if you enjoyed those interactive-movie style games then this is one to check out. The developer is actively seeking feedback from players while they shape the game through its Early Access journey so getting in at this stage could make this title even more interactive.