Admit it, you’ve always wanted to be in an angry mob. If gaming has taught us anything, it’s that there is a little devil inside of us all that just wants to smash stuff up. Then again, maybe you’ve been in an angry mob and ticked it off the bucket list; well to you I say, have you ever been a leader of an angry mob in Ancient Greece? No? Me neither. Which is why Okhlos, a bizarre indie title from the brilliantly named Coffee Powered Machine, is such a tempting prospect. Okhlos charges the player with forming a giant mob of various Ancient Greek people and guiding them through Greek cities, taking down buildings and bad guys along the way. The comparisons with Pikmin are unavoidable, but Okhlos feels like something more than a little different.

The amusing 8-bit style graphic design is just the beginning of the charming presentation; cute little soldiers, slaves, philosophers and animals inhabit the cities that you must riot. The brilliant array of sound effects and music add to this unique look and feel; the slow-jazz music that plays when you visit one of the in-game shops (not the micro-transaction type, mind) is completely out of place, but completely brilliant. The mechanics are almost mindlessly simplistic, at least for the time being; just guide your little rabble rouser around the multi-zoned maps with the left stick (I was using a controller with my PC) and target enemies and other obstacles for your mob to destroy with the right stick. There are power ups to use, as well as the welcome addition of a sprint button which zooms you and the mob swiftly across the city. 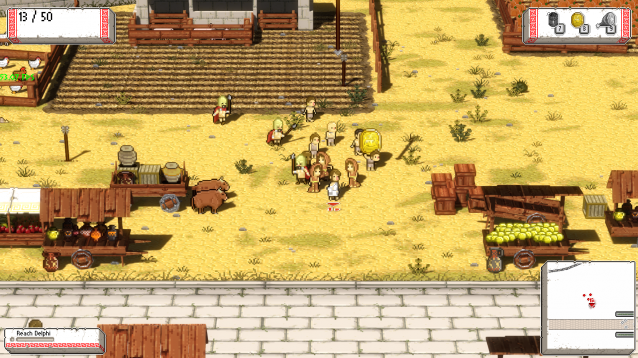 The ultimate aim of the game is to take down every enemy in each section of a city including the giant god at the end of each level. In the current preview build, I was able to play through a couple of cities, Delphi and Sparta. While the gameplay is, as I mentioned, somewhat mindless, that doesn’t stop it from being great fun. The act of collecting individuals for your mob has a Snake-like appeal; growing the rabble makes you feel successful and powerful, but it also makes the mob more difficult to control. Admittedly, at this point this is largely due to some suspect pathfinding, but it actually works well to force the player to keep one eye fixed on their mob. The combat is pretty satisfying; unleashing your followers on a few unsuspecting enemies is an amusing experience, despite its simplicity.

A lot of what makes Okhlos so appealing in this current preview stage is the well-crafted combination of gameplay mechanics and visual/aural effects. Each instance of combat is accompanied by a shaky camera that’s a little annoying at first but soon becomes a welcome sight. Plus, when your mob makes contact with an enemy, a little dust cloud is kicked up and words like “WHAM!” and various Greek phrases pop out of the conflict; Okhlos expertly demonstrates the indie charm that many gamers love so much. The game isn’t all run-and-gun though (run-and-mob?), there is an element of strategy involved. The cities are inhabited by various different types of people to join your mob. There are general citizens to fill your ranks, soldiers to do extra damage, philosophers to make them all more angry and even various animal types; apparently they’re a little unhappy with the way they’ve been treated too. 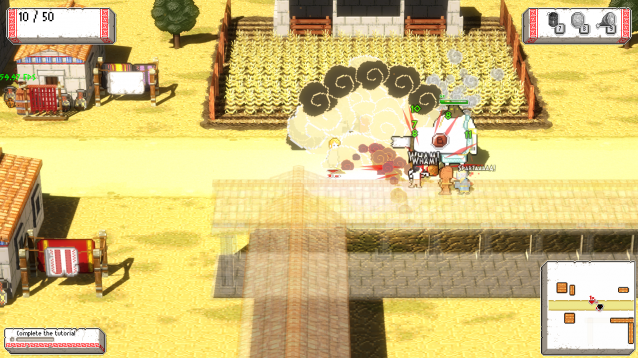 There are various other characters that you can recruit (a simple act of walking past them) and it’s a system that lends the game a degree of strategy that should be increasingly interesting as the game progresses through development. While the preview build was a little too easy to require serious thought as to who I should recruit into my mob, there’s certainly a lot of potential in this mechanic. What’s more, Okhlos also allows the player to hire heroes that give your mob certain buffs like consistent healing, extra strength or an increase to your mob limit. The heroes are all awesome 8-bit recreations of historical and mythological individuals like Spartacus, Hippocrates and Perseus. They’re even decked out in suitable outfits. They can be bought by selling members of your current mob (to the slave trade?) at the hero’s market or they can sometimes be found wandering the city. In effect, it’s another small mechanic that should provide a nice bit of extra variety in strategy.

Okhlos is an intriguing prospect. The gameplay itself is familiar, but the Ancient Greek setting and quirky presentation are welcome additions to the formula. Coffee Powered Machine are currently using their IndieDB page to provide updates on the game, including some excellent inside-development posts that take fans a little closer to the development process. The preview build that I played was great; simple, but fun. It’ll be interesting to see how the game develops from this point onwards. The devs have promised that the final game will feature various cities each with their own enemies and final god bosses; if that plan comes to fruition then Okhlos may be one of the best indie games to watch as we head into the better part of 2014. 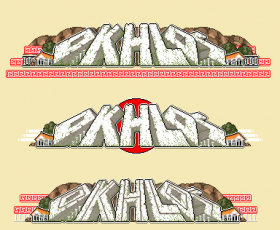