When the first POSTAL came out back in 1997, I was a mere teenager, and it’s safe to say that I thought it was cool to be “edgy”. The intentional mindless violence was there simply to stick it to the man, to flip off those who were trying to censor or ban videogames. This seemed like the kind of rebellious action that I could get down with so I quelled my adolescent rage by shooting everything that moved. Nowadays, I’m a bit more mellow in my old age, but everyone has bad days and it’s not entirely unheard of for me to deal with those by booting up DOOM Eternal or Hitman. But now Hyperstrange and CreativeForge Games are providing another option with POSTAL: Brain Damaged, a spin-off title that takes the form of a retro-themed shooter. 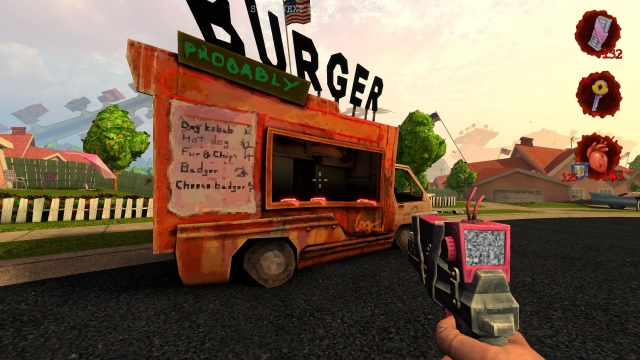 With a style very reminiscent of the FPS games of the 90s, this is firmly in the newly-popular “boomer shooter” category of game. There’s very little in the way of plot points or cut scenes, just a tonne of enemies to shoot and some very pixellated textures. It feels exactly like the kind of game that would come in a gigantic cardboard box and require two meg of extended RAM and a Voodoo card.

It’s probably a bit crass these days and certainly not particularly “woke” to be randomly killing everyone in sight for no reason, but it appears that this is a fever dream in the dude’s head rather than real life suburbia. The trailer shows him waking up in an asylum, so it’s been assumed that this is a direct continuation from the end of the first game. Regardless, everything is done in the worst possible taste. Cheesy one-liners like “So that’s how they make chunky salsa!” and “Is that pronounced Gibb or Jibb?” are common (voiced by series veteran Corey Cruise) throughout the game, there’s a dedicated button for urination, and there are posters of women in bikinis littered throughout the environment. There’s no pandering to modern sensibilities at all, and if I’m honest a lot of it is a bit cringeworthy, but that’s quite possibly the point. 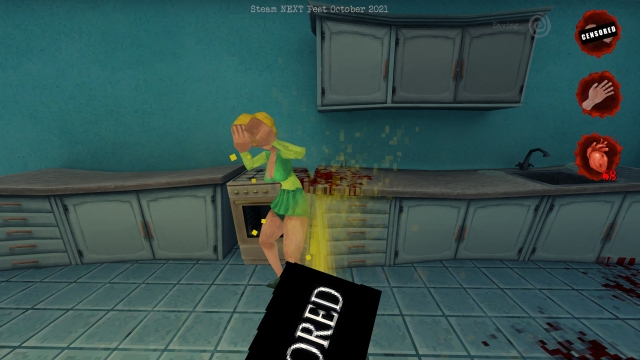 The level that you get with the demo is rather large, but quite repetitive. There are only a relatively small number of enemies and most of the houses look very similar with a great deal of asset reuse. I’m not sure if this is intentional to make it seem more authentically 90s, if it’s just temporary while the game is in development, or if the developer is just being lazy, but it does make things a little samey.

On the upside, the actual mechanics of gameplay are just as satisfying as always. The vast majority of enemies are non-threatening, but there are giant floating MAGA hat-clad rednecks who throw burgers at you, old men with shotguns, and a lot of people have dogs the size of a human so you alternate between simplistic blasting and the ducking and weaving of an old-fashioned firefight. It’s very gratifying, and of course, the corpses of everyone you kill can be turned into viscera with a carefully placed shot post-mortem. It’s not big or clever, but it’s still very satisfying to do. 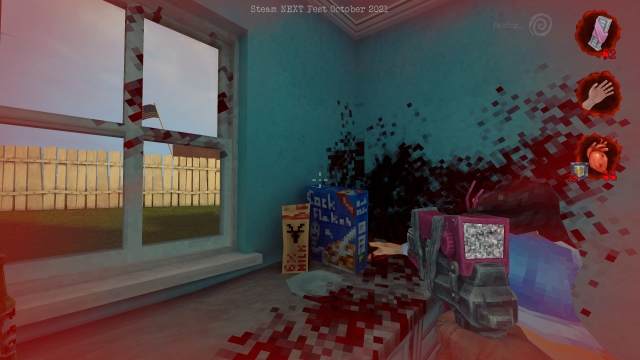 There’s a banging hard rock soundtrack too, much like you would have expected back in the 90s, which helps crank the realism to 11 and maintain that old-school illusion. Honestly, if you’d told me this was a long-lost demo of a game from 1999 I would likely believe you.

I might feel a bit guilty for enjoying it, but POSTAL: Brain Damaged was the most fun I’ve had during the Steam Next Fest, in fact it’s the only demo that I’ve fully completed more than once. It’s puerile, crass, cringeworthy and any other childish description you care to throw at it, but it’s bloody great fun and that’s the most important thing.