A great game demo requires a few things:
A generous serving of gameplay, a sprinkling of replayability, a heap of potential, a smattering of gorgeous artistic style, and top it all off with an essence of intrigue - then fan those flames until anticipation bubbles over and you’ve got yourself a winning formula!

Part alchemist simulator, part crafting puzzler - Potion Craft manages to distill many elements of other genres so effortlessly well. You run a medieval alchemy shoppe autonomously, harvesting the ingredients from your garden, attempting to alleviate the ailments of your clientele, and tinkering away at your workstation to perfect and discover potions with an assortment of effects.

Initially, I was enticed by how charming the game looks. The visual design of Potion Craft is heavily inspired by the medical books and illuminated manuscripts of the middle ages, encapsulating its own unique but distinct brand of the fantastical medieval theme. 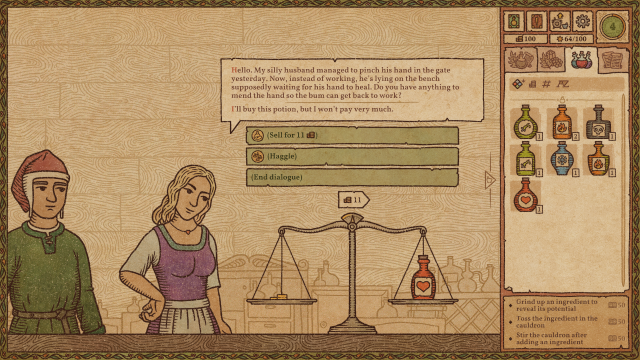 Another major plus is the physicality of the game's mechanics. You actively crush ingredients in a mortar, tentatively stir the cauldron to adjust the potions overall effectiveness, tipping water into the broth to neutralise and perfect the brew… it’s magical!

Though the game encourages you to experiment with the ingredients sourced or bought by traders, The reality is that trial and error can doom your business significantly. It’s easy to run out of mushrooms and herbs early on, with customers sometimes requiring tonics with effects that far exceed your abilities; which wouldn’t be such a bother if the repercussions weren’t so detrimental.

If your reputation gets too low, you will be unable to haggle. Consequently, profits can’t be made to purchase any more ingredients from merchants and so you will be destined to be subservient to your customers for a few days until you get back on your feet. And though the visualisation of concocting potions is wonderful (akin to planning a route on a map with a limited set of paths, tweaking and adding more paths to reach the desired destination), discovering new effects can be incredibly difficult on such a large map - of which feels barren with the current attainable effects as of writing. That and the lack of elemental cohesion to where particular potion effects may be was a bit of a doozy. I would have thought the “Charm” and “Libido” effects would be around where the “Healing” effect was, similarly with the “Fast Growth” and “Rich Harvest” effects being at a wide distance. Hopefully the final game resolves the issue, perhaps lending a hand from ancient alchemy tomes for hints, tips, guides, and puzzles to solve - perhaps even turning the search for the right potion into more of a treasure map.

I may have spent more than half the preview nit-picking the demo’s faults, but that’s because I thoroughly enjoyed what I experienced! Like the concoctions craft in our potion mixing-room, I only strive for perfection via meticulous tweaking and adjustments.

The developers have teased some extra features, as the demo isn’t the final nor complete build, inclusions such as a better recipe book management (hopefully adding a glossary!), ingredients like oils, wines, berries, salts, and crystals to play with, complete access to a vamped-up alchemy machine in the basement, as well as gardening and planting management!

Here’s hoping for a winter garden/greenhouse, or the ability to whip up a potion to enrich your own plots and crossbreed ingredients… a witch can dream! At this point, I cannot wait to try the finished product. There’s still some refinements that need to be made to the final recipe, and a little more time to ferment; but even so, I'm spellbound.

Potion Craft: Alchemist Simulator is due to release later this year on Windows, and is currently available on Steam.