There has been a huge resurgence in retro-styled first-person shooters as of late, from Dusk to Amid Evil and the upcoming Wrath: Aeon of Ruin. Prodeus is the latest in the line of retro-styled shooters but it’s also clearly doing it’s own thing whilst wearing its inspiration loud and clear. 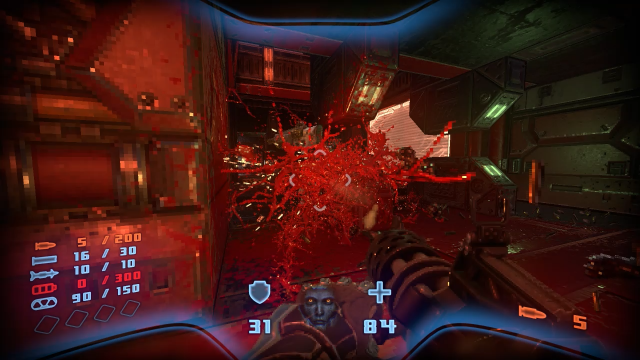 It’s easy to be reductionist with games: “X is like Y with Z” helps to give an idea of what something might play like but it eliminates all nuance. “Prodeus is like Doom with extreme gore” is accurate but does a disservice to the frenetic level of action and cool visuals.

Prodeus initially draws you in with its cool pixelated visual style, everything has a really satisfying chunky look to it that is hard to describe unless you see it in action. Using some clever trickery it uses 3D models for the enemies but displays them as if they were sprites. Combined these give the game a wonderfully retro look whilst featuring modern flourishes.

The weapon selection has the usual suspects. Pistols, a shotgun, a chaingun and rocket launcher make up the basis of your core arsenal and fortunately at this stage they all feel great with wonderful kickback and oomph behind their animations and carnage. This is great as it makes the blood and gore you’ll create as you dismember enemies and stain the walls all the more satisfying! Likewise the enemy selection feels like it’s used Doom archetypes for inspiration but as the saying goes, “if it ain’t broke don’t fix it”. From soldier types to fireballing throwing monsters and flaming homing enemies, they feel familiar but that works in its favour as it plays into your existing knowledge. The visual flair the roster has, combined with the fluidity of movement and visceral nature of combat makes the rogues’ gallery extremely satisfying to fight.

Level design is also really interesting with some wonderful future-tech base influence and natural elements flowing in their designs so it’s shaping up to be a fun romp, the fact the game will come with a built-in level editor as well as community map browser gives the game some incredible potential to last an awfully long time. 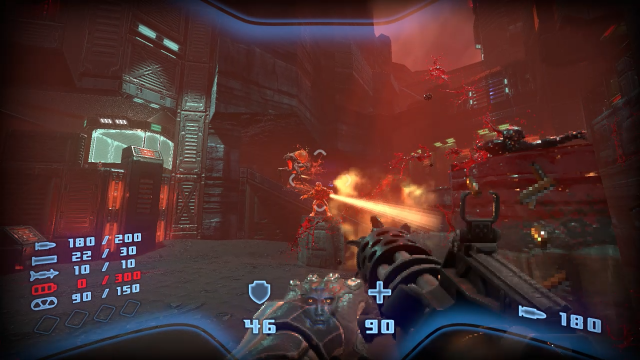 Oh, it’s also got a soundtrack crafted by the master of retro-styled modern shooter music, Andrew Hulshult, this time with a big Heavy Metal focus a la the recent Doom titles (he did the music for the Doom Eternal expansion so he has pedigree). His body of work across a variety of shooters (including the aforementioned Dusk and Amid Evil) is impressive and he’s managed to infuse Prodeus with some adrenaline generating treats for the ears.

All in all, Prodeus is a fantastic looking and feeling old-school shooter for the modern day and I can’t wait to see what the final product looks like. It makes you remember that games should be fun and over the top and it looks set to deliver that in spades!