It’s no secret that gamers grew exhausted of the World War II shooter genre several years ago. When titles such as Call of Duty, Medal of Honor and Brothers in Arms were firing them out faster than an MG 42, it was tiresome to have each new big release feature America defeating the evil Third Reich and saving the world while patriotic music played in the background. It seems the current generation of videogames has since abandoned the trope, with the new focus being on futuristic warfare involving mechs and bio-engineered weaponry. However, with the critical and commercial success of DICE’s Battlefield 1 – which shook up the genre by offering a new perspective on one of the bloodiest conflicts in history – as well as a new Call of Duty game revisiting the Second World War, it seems the historical shooter is on the verge of making a comeback.

Among several announcements and exclusive first looks that were unveiled during a livestream by Starbreeze last week, footage and information regarding the upcoming first-person shooter RAID: World War II was revealed. Currently in development by Lion Game Lion – a studio established by former Overkill Software employees – the game is promoted as a Payday 2 meets Inglorious Basterds co-operative shooter that involves impairing the Nazi command by heisting and bombarding your way across Europe. RAID abandons the huge beach storms or large-scale battles in favour of the covert operations that aren’t recorded in the history books but still triggered a large barrier on the German military forces. When four criminals – named Stirling, Wolfgang, Rivet and Kurgan – are freed from prison by the shadowy Mrs. White, they are recruited into British secret intelligence to help turn the war in favour of the Allies by doing what they do best – by pillaging, sabotaging, eliminating and stealing anything that bears the swastika.

The game operates as a four-person co-operative shooter where players take assignments from various high-level generals – one of whom will be played by famed actor John Cleese – and inflict carnage behind enemy lines. One of the levels previewed so far involves the team making a full-frontal assault on a Nazi-occupied bridge and destroying the anti-aircraft guns, all while repelling the invading reinforcements. Other mission types teased by the developer included blowing up towers, robbing trains, and invading Nazi camps to take out army commanders, which will all tie together in larger story arcs. While it seems most of these levels will be focused on aiding the war efforts, Lion Game Lion will also incorporate a greed element where players can find randomised loot to steal that will allow them to finish with a higher score and be able to buy new weapons and cosmetic items.

Teamplay is a big push for the game. There are four classes available which will determine what type of weapons and equipment you’ll have. In the gameplay video from E3 2016 the Demolition Man class – which handles explosives and shotguns – was utilised by the player. The synergy between classes is an important part of gameplay, as some actions can only be completed by a certain class and some skills will also buff other players, making it vital to find the right combination to mix-and-match certain playstyles. 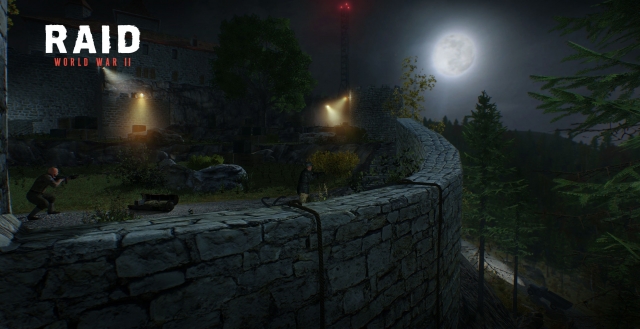 The idea to create such a project originated during Lion Game Lion’s development of DLC for Payday 2, and game director Ilija Petrusic felt the formula for such a game would also fit a Second World War setting. It will have a more tongue-in-cheek approach to the subject matter, rather than the “war is hell” tone many World War II videogames go for. Petrusic has also hinted that sometimes you may even be doing jobs for the Germans – as long as it fits into the greater good narrative the game is going for.

One thing Lion Game Lion wish to pursue is reworking what was utilised well in the Payday games and adding them to RAID. Interaction between the characters was an important element of that series, and so Petrusic assures players that has made it into his game, and the sound department has “really nailed” it. It will also feature special enemy types. Instead of facing off against Tazer units, the special enemies in RAID will be more fitting to the time period. An incendiary opponent was seen during the demo, approaching the group slowly but bearing a powerful flamethrower. It’s unknown yet what other special enemies may make an appearance, but it’d be safe to assume snipers and grenadiers will show up.

One notable thing about Payday 2’s development was the amount of post-launch support the game received. Since 2013, the game has received almost 150 updates in monthly increments and doesn’t see any sign of stopping soon. Petrusic notes this will also be a focus with RAID: World War II, as new content – especially maps – will be released on a regular schedule as long as the players want it. In a somewhat controversial turn RAID will run on the Diesel Engine, a driving game engine notorious for inconsistent framerates, multiplayer desync and countless bugs. Despite the complaints, Petrusic feels it is the right engine to use for the game as the whole developer team is experienced in using it in Payday the Heist. He notes that Lion Game Lion is putting in its best effort to optimise the engine to ensure it will provide a smooth experience for the players.

Lion Game Lion is currently hoping for a Summer 2017 launch date for the PC, PlayStation 4 and Xbox One, just short of Call of Duty: WWII’s November release. Petrusic revealed that Starbreeze had given them eight million dollars to develop the game, and he has been so far overwhelmed by the positive reactions both online and when presenting it at conventions. Could RAID: World War II be the new shooter everyone will be clamouring for? Considering the number of noteworthy releases later this year, it will be interesting to see where exactly it falls in the spotlight.

This looks interesting, although I'm disappointed to see that it isn't an epic battle between an array of hard drives.

I'm looking forward to this. Payday 2, besides the shitty microtransactions, was good fun.

It certainly was. My most played Steam game.