Okay, I’ve only been playing Yu-Gi-Oh, and even then in a digital space, but I want to learn to play the likes of the Pokémon TCG and Magic: The Gathering. However, I’ve begun to see more and more games involve cards in some way.  Some of them are trying to recreate the magic of Hearthstone, while others are taking a different direction. And recently, I’ve been playing games like Downwell, Going Under, Hades and Enter the Gungeon. Learning about the mechanics of the game then doing my best to either exploit them or just get good enough to conquer each and every challenge I have to face.

So roguelike card games seem pretty much up my alley right now, as you can see with my Tavern Rumble review and there is another one of these games coming out this year. 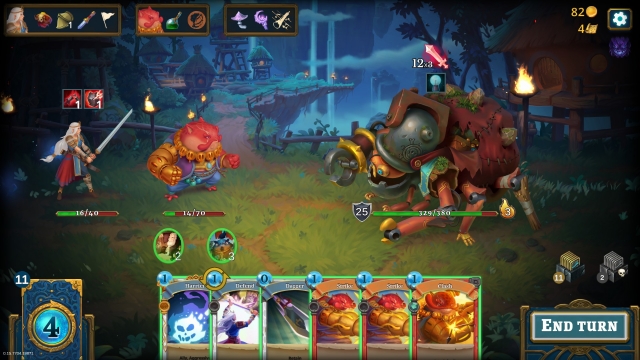 Now, as soon as I entered my first battle, I was instantly reminded of one game: Slay the Spire. You have a set amount of energy to spend every turn, you use cards to attack and block, and the game tells you what your opponent is doing on their turn. I expected this, however there are a few differences that separate Roguebook from Slay The Spire.

First off, you can get a companion; an additional party member with their own deck of cards. There was only one available in the demo, Sorocco the First Mate, and he’s essentially your tank. He gains block if you end your turn while he’s in front and most of his cards are either about gaining block and dealing damage to multiple enemies. Switching your characters between who’s in front and who’s in the back is the main mechanic of battles, with several cards and treasures only working if the one equipped with it is in that position. Every battle becomes a juggling act of sorts between attacking, gaining block and positioning, especially if one of you dies. Sure, you can revive them, but it costs energy, and it essentially fills your hand with dead cards since all the cards that character uses turns into revive cards. Not to mention that it adds wound cards to your deck for the sole purpose of weakening your hand. You truly need to think through every battle, or you might end up in unwinnable situations.

Instead of a randomly generated map with branching paths with events, shops and battles at each point, the game instead uses a hexagonal map that you have to reveal more of using paint brushes and ink sort of like the fog of war you’ll see in games like Civilisation. It does take place in a book after all, and the painterly aesthetic helps sell it. Every chapter always has a path that will lead you directly to the boss, but you’re encouraged to explore the map so you can obtain more cards, treasures, health and gold. You have a number of brushes though, and ink can only be obtained from battles so you have to be strategic with your supplies. The boss of the chapter is always shown and explains how they will work, so you can plan your deck around it as you explore the map. I do wish I could zoom in and out and scroll around the map. It’s a minor thing but it helps with planning out your route. 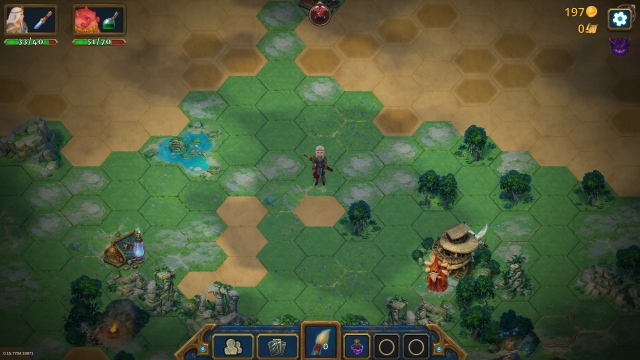 Obtaining cards and making your deck stronger is important, so it should be your main goal when exploring the map. You can win cards from battle, buy them from the shop, or transform cards. That seems pretty standard in games like this. However, Roguebook adds an additional mechanic: gems. Gems give cards additional effects on top of their normal effect, with rarer cards having additional gem slots to make them more powerful. You can find gems on the map, in shops, and they come with transforming your cards. However, once they’re on, they can’t be taken out so choosing wisely is a given. I quite liked this mechanic as I can see the potential of making truly broken combos. That’s not to mention that you also unlock something called Talents based on the number of cards in your deck, like having allies help at the start of battle.

Now, let’s talk about progression. After a run, your characters will gain experience and level up, which will add additional cards to their pool. There’s also a perk tree, which are permanent benefits to your characters, which need to be unlocked by finding pages in the map. Some perks are more generic while others are specific to certain companions.

Overall, I see Roguebook as another game I will be playing for hours on end and I hope to see what it truly has to offer on its official release. The game gives the player enough freedom to do what they want, but enough restrictions so that they have to plan out what they want to do. It does enough to separate itself from the competition, and it makes me think about every action I take in every path I make and every battle I choose to engage.

Roguebook will be released on the 25th of June 2021 on the Nintendo Switch, PlayStation 4, Xbox One and Steam and is available for pre-order right now.

Roguebook Demo To Be Available Through Steam Game Festival 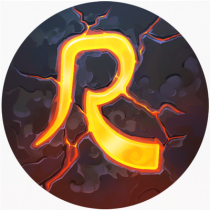