After the fun that I had with Sniper Ghost Warrior Contracts, I was definitely looking forward to a sequel. I love a good story, but I have to admit that so long as a game tells me where to go and what to do, I’m in. So, when I was invited to play the game for a bit with the developer, I jumped at the opportunity. For the purposes of this preview, I was joined by lead creative producer Kenton Fletcher, and lead level designer Daniel Sławiński.

This game and the previous one both follow the same model. You’re given some gadgets by a rich organisation, and sent into a country full of targets who they want eliminated. In this one, however, some of the targets require long-range murdering. By that I don’t mean that you must snipe them, just that you can’t get up close to do it. ~You're so far away from me~

See, the biggest change in Sniper Ghost Warrior Contracts 2 is that some maps have sniper nests set up and ready to use for kilometre-plus killing. You make your way to an area overlooking, say, a dockside warehouse, stabbing and shooting enemies as you go. Then you scout the area with your binoculars to locate the target. Finally, line up your shot and take it, whether you’re planning on exploding them, dropping something on their head, or just blowing their brains out.

Each target has a set route that they will walk, and they will react to things happening. Maybe a fuse box begins sparking, or their way is blocked - perhaps you miss on purpose to make them flee the area! The two people that I spoke to during my game time made sure that I explored some of the different options, and explained others in vague detail to avoid spoilers. It all sounds well thought out, and they highlighted the fact that your perspective is very different, due to the angle and distance. Can you guarantee that the container will drop to the left, or will it drop further right? 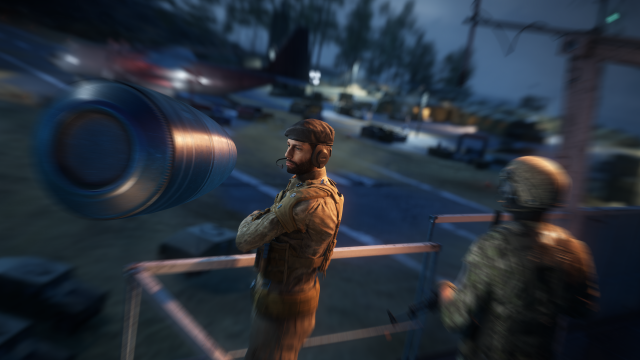 And will he do a flip over the railing?

Of course, I’ve said “some maps”, which means that there are other maps that allow you to play them a little more like the first Contracts. I didn’t get to play those, so I can’t really comment on those two as yet. However, given how well the one level I did play is set out, I have high hopes. Some of the maps were a bit too open-ended, and it was fairly easy to get lost. Contracts 2 still has open maps, but they’re apparently structured in a way that leads you forwards a bit better. To quote the developer: “if you’re not backtracking, you’re probably going in the right direction”.

CI Games has been making this series long enough to have the whole “sniper” bit down to an art form. As such, there’s not really much for me to say about it. Sniping things is fun, using the guide to work out where your bullets should go, adjusting the angles… It’s just fun. The rest of the gunplay feels fine, so I have no notes on that. The graphics looked great, and the dismemberment system makes a welcome return in gruesome detail. Your area of operations, Kuamar, is a nice change from Siberia, both graphically and practically. You can actually go for a swim without worrying that you’re going to die from hypothermia! Of course, since I could only play in one area I didn’t get to experience the whole of the fictional Middle Eastern country, but I’m eager to check it out.

One of the improvements that Contracts 2 brings is something that I quite disliked about the previous game. Rather than checkpoints, it autosaves - and does so regularly. At one point I was able to reload back about two minutes to retake a shot, with everyone on the base already tagged with my binoculars. Also, completing objectives will unlock new spawn points on maps, so you don’t have to schlep all the way across the map if you fancy repeating contracts to complete more challenges. 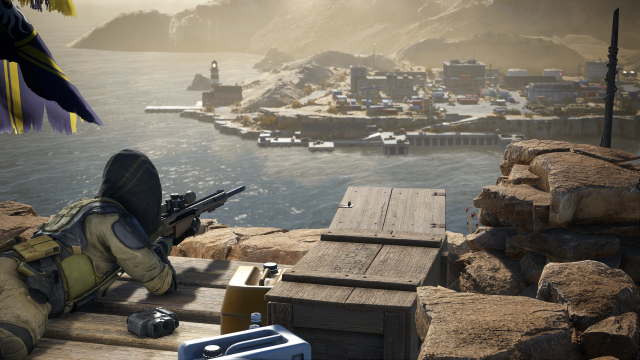 I'm determined to kill this guy all the ways

Challenges make a return from the previous game, but this time there are more of them. Some of them you can stack, such as killing a target without raising an alarm as well as in a certain location. Others, of course, you’ll need to replay for since you can’t both not raise an alarm as well as raise an alarm. Sometimes, you’ll need to interrogate a particular enemy to trigger them! There was replayability in the first game, but this one seems to have ratcheted that up a couple of notches.

The way that the first contract is set up, and reaching the sniping area, does a really good job of inducting you into the world, and showing you what’s what. Apparently they do get trickier across the three long-shot maps, as you might expect, but I only had time to attempt the first couple of targets.

I really enjoyed my time with Sniper Ghost Warrior Contracts 2. I’m definitely looking forward to when it comes out on 4th of June for PC, PlayStation 4/5 and Xbox One/X|S. It’s going to be a bit more expensive than the first game, at £34.99, but given the improvements I’ve seen and been told about, it’s certainly not outrageous.

The GrinCast Episode 293 - The Reason I Own Five