The first console game I ever played was Sonic The Hedgehog. I was born in 1983, but until then hadn't known anyone rich enough to have a console. Computers, such as the Spectrum ZX (which we had) or Commodore 64, I had encountered. But when I heard "SEGA!" sang through the tiny CRT TV mono speaker, I was in. Sonic soon became my favourite videogame character, and up until the Wii games, I could boast that I had played every single game starring Sonic The Hedgehog. Not all on their native platform, but still I had played them. So I approached the latest 3DS platformer with some joy, knowing that I have enjoyed the most recent multi-platform titles.

The story is that Sonic with his friends Tails, Knuckles and Amy have arrived in a previously unexplored area (like in every game since Sonic The Hedgehog 3...), and Amy has been kidnapped. Having met series newcomer Sticks, they enlist her help to find Amy and rescue her from Relic, an ancient bad guy snake in a mech suit. Pretty standard Sonic storyline.

I got to play three different types of level; Platform, Boss and Race. Platform levels are your general-purpose side-scrolling Sonic levels, with loops and spikes aplenty. Boss levels have you running away from the camera whilst avoiding the boss' attacks. Races have you against one of your friends, as you race side-scrolling towards the finish line. I'll start off by saying, I was very unimpressed by the Platform stage. The emphasis seems to be less on speed and more on exploration. You can switch between characters by tapping their portrait on the bottom screen, at almost any time you're stationary. Each have different attacks, such as Sticks with her boomerang, Knuckles and digging through certain areas and Tails for being able to fly up in specific locations. However, I still mainly played as Sonic, as his ability to smash through blue crates blocking the way was unique to him. This was disappointing, as he moved at the same speed as the others, which was often barely a jog. He can spin, but that doesn't seem to make him go any faster. You use an energy whip to latch onto enemies and swinging hooks, as well as catapult away from the screen to reach new areas, though they always have a return catapult to fire you into the screen. When you reach the end, you are graded on whether you finished in a par time, collected all of the rings and found crystal shards. This gives you reasons to replay levels, but given that it took me almost ten minutes to do the one level, I wasn't keen on doing so.

The Boss stage on show was against a giant worm. At the end, it was again graded on time (you can boost to speed up) and amount of rings collected. You simply have to make sure you're not on the same path as the upcoming obstacle, and obey the on-screen prompts to jump. It's fairly entertaining. The Race stage was against Sticks, and was where I finally felt the speed that the Platform stage was missing. You run, hit boosts along the ground and try to reach the finish line first. Springs, spikes, enemies and loops are all present, as with the Platformer stage, which add to the difficulty. It was the level I had most fun with, and would consider replaying to beat my times.

Now, my final thoughts on this are not very positive. The levels are big, but without the speed they just feel too big. It's clear that Sanzaru Games have tried to compensate by making the Race stages, but despite being fun there doesn't seem to be any reason within the story that they exist. The enemies are generic - flying one, ground one, ground one with shield - and the locking on for the homing jump is very poorly coded. As a platformer, it is passable, but as a Sonic game it fails. Sonic in name only.

This had a lot of promise but seems to have failed to deliver once more. Come to get used to this current era of Sonic. 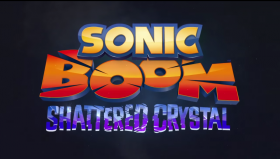