Bright pixels, old-school side-scrolling gameplay, physics, blood, swearing, explosions… I’m not gonna lie, throw in some time travel and a grappling hook and Terror of Hemasaurus would be my perfect game. In fact, it does actually have time travel!

Terror of Hemasaurus sees you controlling a kaiju (giant monster) as it awakens after an unspecified amount of time trapped in ice. There’s a cult that claims to have created you before sending you back in time so that you could awaken at this moment to save the world from climate change! By destroying it city-by-city. 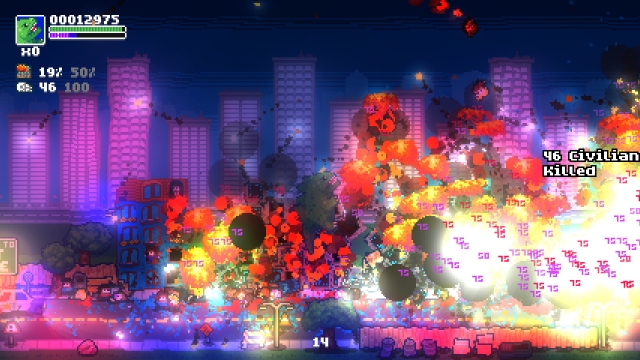 You can jump, grab, kick & punch, and the controls are surprisingly easy to get to grips with. Each kaiju - or at least the two in the build I played did - has its own special move: a shockwave-causing roar, and fire breath. These can only be used a limited number of times, as they drain an energy bar that you can’t refill until the start of the next level. The full game will allow four player co-op, though I didn’t get a chance to see if I could do that. There appear to be some unlockable kaiju, too, I imagine to make it more replayable.

Even though I only played the first few levels, I can honestly say that I enjoyed this. The controls are solid and easy to pick up, at least if you use a controller - I didn’t try the keyboard controls. The graphics are vibrant, the sounds of destruction are great, and there’s a fantastic 16-bit soundtrack running under everything. 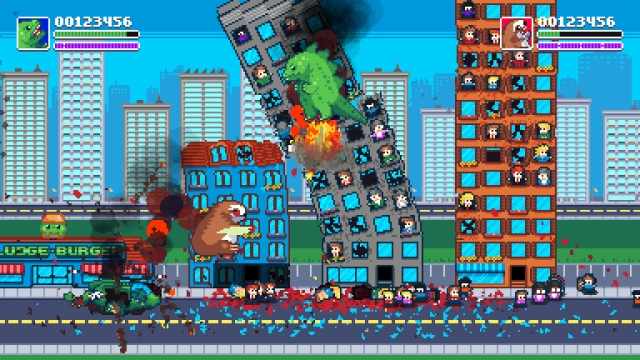 The only negative thing I have to say at this stage is that I wish the bullets that some humans shoot at you didn’t take so much health. You can refill it by eating people however, so although it’s tempting to just kick everyone around, or pick them up to throw at other people - it’s a good idea to let them run around in case you need health.

Terror of Hemasaurus was already on my wishlist, since it showed up during gamescom, but now I’m really looking forward to it coming out. Something that I’m looking forward to seeing more of is the domino effect - if you take out enough of a building’s corner, that will cause it to topple. It hits the next building, which hits the next… It’s brilliant fun. There’s no release date yet, but I’m keeping my ear to the ground for some time in 2022.