Yager has spent a good while working on The Cycle with the help of the community. I originally previewed it last year after getting into the alpha, with tests running throughout the year and into 2019. In August, it finally entered early access stage exclusively on the Epic Store, now open 24/7 for all.

There is a Fortnite-esque feeling about The Cycle in terms of the art direction and gameplay elements. It’s certainly not as frustrating as I find Fortnite to be though, with others seeming to build structures to hide behind quicker than I can blink. Instead, players in The Cycle have begun to strategically place turrets as they flee from the scene of battle. 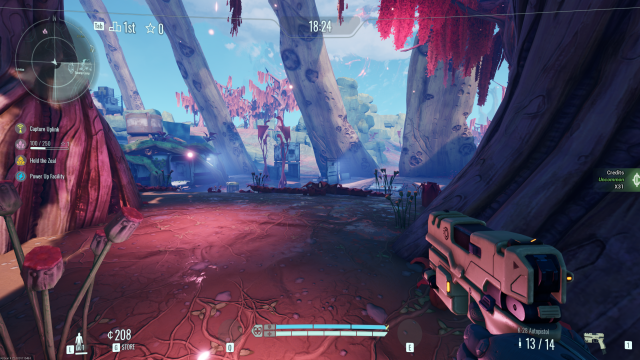 In truth, it is largely the same game that I played last year. There are three factions you can choose to play in, each netting you a set of different technologies and items you are able to craft. As you go through the crafting menu, each weapon will include the Osiris, Korolev or ICA logo, with the level required. Alongside a good standing with the factions, you’ll also need a varying amount of resources from playing matches. Items you craft can be dropped into battle once you’ve accumulated money from completing contracts and defeating enemies.

What are these contracts I speak of? Well, as you enter into a new match, you are given a set of objectives to complete. For the unaware, you play as a prospector dropped into Fortuna III, a planet in a place far, far away. It’s your job to help your faction complete as many of these as possible within the 20 minute time limit before the radiation storm takes your life away. Of course, you’ve also got to worry about the other unfriendly prospectors, along with the monsters on the planet.

In solo mode, it’s vital you team up with someone if you want to make it to the end of the match and get an evacuation off the planet. Once you’re in a pact with another player, collected resources are shared between you, no matter if you’re both in different factions. It also makes it easier to double team other prospectors who come into your path. 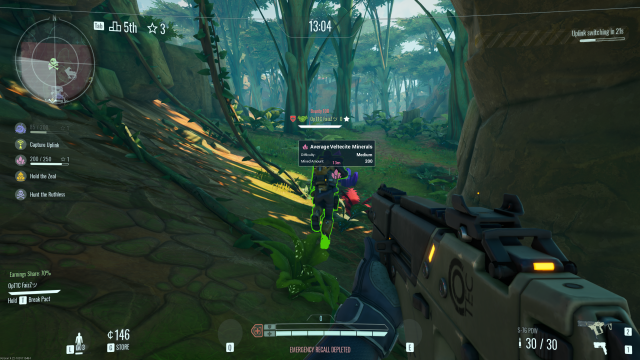 Collecting resources is pretty simple, depending on how many ores or whatever you’re collecting are available changes how many monsters will spawn in your location in an attempt to destroy your collection equipment. A spanner is thrown into the works when you’ve got a lot of monsters to face, along with rival prospectors arriving to steal your finds. It’s a real kick in the balls if then your teammate decides to defect to this other prospector, leaving you alone, afraid, and most likely dead. At least you get one chance to respawn if you do get downed.

It’s this replay loop that I find quite enjoyable. The Cycle isn’t a battle royale in the sense that it’s not a last man standing affair; instead, an evacuation ship will land somewhere on the map, just as the radiation storm closes in. It’s a manic event as all the prospectors still alive rush for their saviour, sometimes with a little bit of teamwork to clear the landing zone of any monsters before the ship can land. After that though, it’s all-out war. You could just jump onto the ship and be done with it, but who doesn’t enjoy denying anybody that by hanging around in its proximity a little longer?

Personally, I find The Cycle much more enjoyable than something like PUBG. I find it difficult to take when I’m sniped from hundreds of metres away after spending half an hour or more collecting weapons and whatever else I can find. Perhaps that’s just because I’m not very good at it (there’s no “perhaps” about it to be honest), but I think anybody with that same opinion should definitely try out The Cycle.

After all, it’s free.