Although survival games aren’t usually my forte, The Fifth Day caught my eye because it’s not zombies, it’s robots. So I decided to give it a go and installed it, unsure of what to expect. You know, apart from robots.

I decided to give the tutorial a go and it’s quite certain that it isn’t finished. The basics are there, but it tells you to go into each section - such as weapons training - and the item you need isn’t there. There was no gun, no hacking console… But I soldiered on, deciding to get some on-the-job training in.

Loading up Freeplay, I found myself in a large, open, fairly empty world. And it is pretty empty - I decided to map out the outskirts of the world on my second play attempt and didn’t encounter anything but a couple of shacks from one corner to the next width-ways in a straight line. There’s no actual map, just a compass. 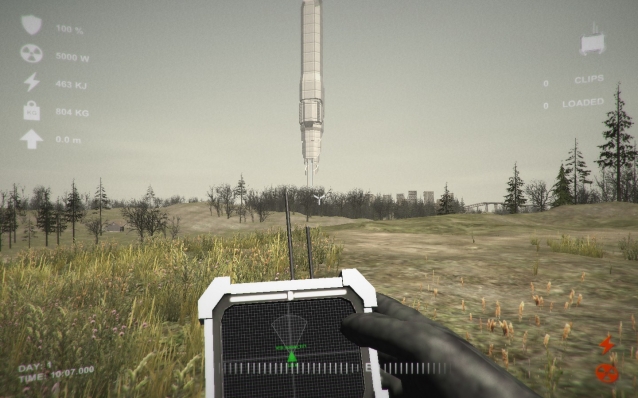 But playing for the first time, and in my first survival game, I was very twitchy. I didn’t know what was coming or where it might come from. You have an RFID scanner, which lets you know when there are any other AI in the area (did I mention you are a robot?). I also found a gun and some manuals on how to build things - once I managed to harvest some wood, somehow. Given that the tutorial said that I could get a big flying harvester to do it for me, I set about looking for one - so I headed towards the big obelisk in the distance.

After realising my mistake - by being chased by hostile, immortal enemy AI robots (or perhaps I just missed when I shot at them), then having my energy affected by the intense obelisk-radiation, I ran for cover in some abandoned city buildings. And got shot by different hostile AI robot.

Another thing the tutorial didn’t prepare me for was the lack of energy. Being a robot, you have to store energy in capacitors. You can collect these if you find them, as well as energy sources. Solar ones give less energy, but are lighter and less radioactive, whereas other types are heavier and more radioactive. This needs to factor into your planning as you go about the landscape. Heavier loads mean using more energy just by walking around. Running and jumping drain extra energy, and it drains faster at night. Much faster. 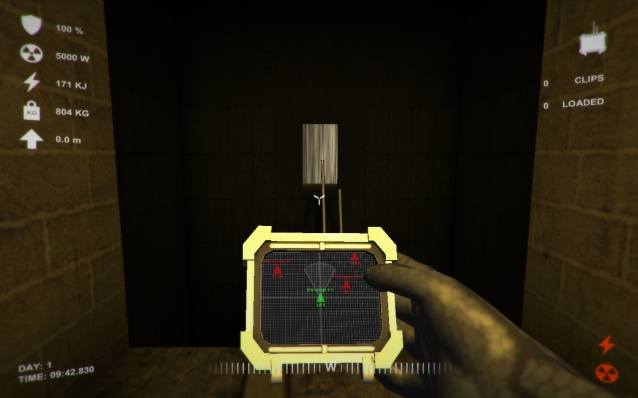 Playing in freeplay mode is, honestly, quite boring. There’s nothing to do other than look around for things you won’t find, until nightfall when you’ll eventually die. You can save, but there’s not much point unless you manage to find one of the randomly generated items early.

Multiplayer was on one of the two servers, though you can create your own to play with friends. The chat window takes up the middle of the screen and you can’t exit by hitting a key, it has to be clicked on - which means you can’t type something quick whilst running. Using a third-party voice option like Teamspeak is more ideal, if you want to play with people you know.

I couldn’t stop wondering - what do you do? I’m used to there being an end goal, so the lack of one was very distracting. I know you have to gather resources, but since you can’t do that without an RFID hacker and an automatic harvester, you’re stuck if you can’t find them. For example: if you find an axe, you can’t use it to chop down trees for wood, despite the abundance of trees. 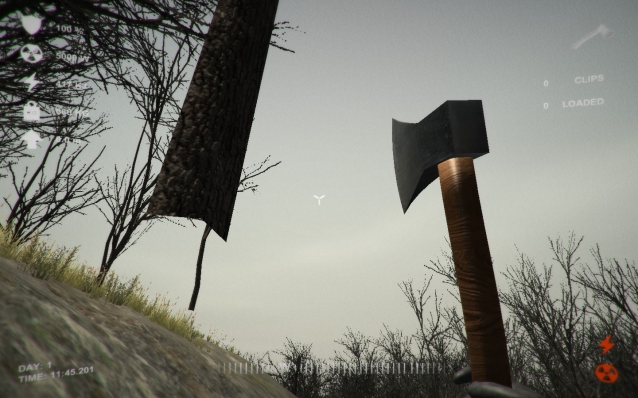 But on the subject of hacking, it really is a useful, but risky, thing. Enemies and the harvesters all have RFID chips, due to them being robotic. You hack by using a hacker gun thingy and aiming it at a target for several seconds. Once it boots into the command screen, you need to type in the commands. Which means you need to be safe if you plan on hacking an enemy robot - because once again, you need to type out the commands. As in DOS or Command Prompt.

Of course, currently if you’re walking carefully behind a bot and aiming at it, then it goes into the command window, you continue to walk. Which means you get in front of it. Which means it freaking shoots you in the back, with no easy way to escape the window.

The hacking could be simplified and the user interface could do with some tweaking to make it more user friendly (such as the escape key being able to close pop-ups), but from what I’ve seen, this game is far from the worst of its kind. The graphics are a little simple and the grainy “you’re a robot so have non-HD cameras for eyes” effect is a little annoying, but they do their job for an Early Access game. There’s plenty of room for improvement, but it will be interesting how it develops.